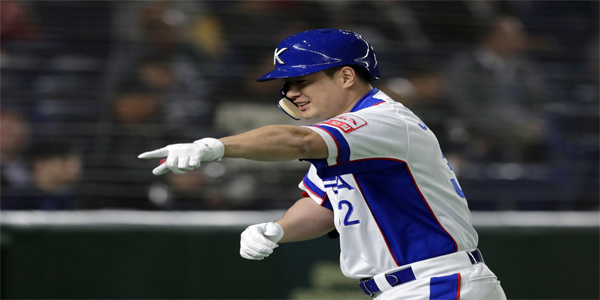 Baseball in Korea. Yup, we think that’s something we can help you warm up to.

ESPN’s participation obviously helps, as they will be televising games played in the Korea Baseball Organization (KBO) on a regular basis. BetAnySports will have daily odds on these games, and you will of course be able to follow them through Sports Betting Prime and make real-time wagers.

And one of the teams you’ll see a lot of in the coming weeks is the Doosan Bears. And for good reason – because they are the defending champions.

The Bears put on a late rush to tie the SK Wyverns for the regular season championship, and won the tie-breaker on the basis of having an edge in the season series. That got them a pass into the championship series, where they swept the Kiwoom Heroes in four straight.

Headquartered in the capital city of Seoul, the Bears were slightly outdrawn last season by the LG Twins, who share a stadium with them. Still, they were one of only three teams in the KBO to draw over 900,000 fans.

There is a big difference between this year’s Doosan squad and last year’s. That’s because they lose the KBO’s Most Valuable Player. Moundsman Josh Lindblom had a sizzling 20-3 record last season, sneaking his WHIP (walks plus hits per innings pitched) under the 1.00 mark. And that earned him a three-year, $9 million deal with the Milwaukee Brewers, the same team that plucked another league MVP, Eric Thames, a few years ago.

So there is naturally a big hole in the rotation. And it is highly questionable as to whether they will get an All-Star level performance out of Raul Alcantara, a former member of the Oakland Athletics who had a .500 record for a .500 team (the KT Wiz) last year.

The big hitter for the Bears, if last year’s effort was any indication, is Jose Miguel Fernandez, who led the KBO in hits last year and batted .344. He does not bring a lot of power to the table (15 homers in 2019), but that won’t necessarily be critical for the ex-L.A. Angel, because in Korea they are playing with a ball that has been “deadened.”

A drop in power, however, is more significant for Jae-Hwan Kim, who developed a tremendous reputation as perhaps the league’s best all-around batsmen. BetAnySports patrons would certainly be impressed with these spectacular stat lines for a three-season period from 2016-2018:

Last season, everything dipped. Kim hit just .283 with fifteen home runs, and his slugging percentage dropped 223 points. It is fair to say that for a team that has to compensate for possibly being weaker in the starting rotation, he’ll have to bounce back in a big way, not only for the Bears to have a chance to repeat, but for him to have any value in the international market. In the off-season he was “posted,” which made him available for MLB teams to make an offer on. But no one really bit. At age 31, he may have his last chance to make himself more attractive to the major league teams – but only if he can bounce back.

You could probably draw a comparison between the Bears and the American League’s Houston Astros, in the sense that Doosan reportedly got out ahead of its competitors in the KBO in the area of analytics, to the extent that it has led to a title. This organization operates like a well-oiled machine, and that’s been the case for some time.

And despite the departure of Lindblom, there is holdover talent left on the staff. Young-ha Lee, a 22-year-old, went 17-4 last season, but how close will he get to that kind of production again? Over his first two years in the league, he had permitted 15.6 runners per nine innings to reach base. And he’s not overpowering.

So we are going to have to wait and see how they will meet the challenge.

You can wager on Korean baseball action at BetAnySports, which gives you the best odds for the duration……… Remember that you can place wagers while the action is in progress through Sports Betting Prime……… And players have five casino options to choose from, including two which offer live dealers……. It’s easy for you to open up an account – all you have to do is use your debit or credit card, person-to-person transfers, or the virtual currency of Bitcoin, which is fast and easy with their automated system, and NEVER incurs a transaction fee!

NASCAR Betting — Darlington is Site of the Big Return May 17