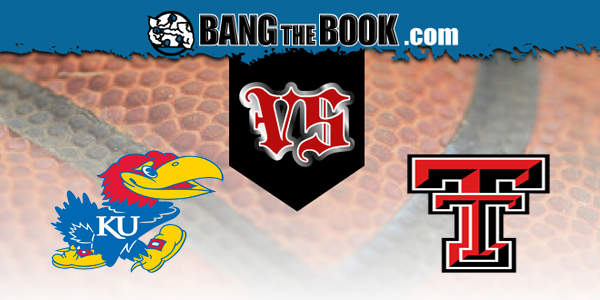 A light college hoops card on Thursday night features teams from several different conferences and games across the nation. There are a few pretty good tilts tonight, including potentially key non-conference games between San Francisco and Oregon and NC State and Saint Louis.

Our focus, however, will be on one of the spotlight conferences games. It won’t be Creighton vs. St. John’s nor will it be Seton Hall vs. Marquette. We’ll be heading to Lubbock where Kansas and Texas Tech will face off in the only top-25 battle of the evening on ESPN at 7 p.m. ET.

BetOnline Sportsbook has the host Red Raiders listed at -2.5 with a total of 133 in this one. Early betting action has favored Texas Tech, but money has also come in on the over, which seems counterintuitive with the nation’s top-ranked defense.

Let’s see what we can find on this matchup to gain an edge.

Bill Self’s boys have rattled off six wins in a row after the Thanksgiving loss to Gonzaga. In that game, the Jayhawks allowed 1.245 points per possession. They have not allowed more than .969 PPP since. It’s not like they’ve played a weak schedule. Among those six wins are Kentucky and Creighton, though those were very close battles that could have gone either way.

Kansas also struggled on December 5 with North Dakota State in a 65-61 win. The Jayhawks are a work in progress in the early going, but they’ve found ways to win and the bottom line matters early in the season. One big reason why Kansas has struggled is that they are shooting 30.3% on “Far 2s” per Bart Torvik. We’re seeing a lot of teams move away from the low-percentage mid-range jumpers, but that hasn’t made its way to Kansas yet.

Another problem has been finishing at the rim. Kansas has been underwhelming on “Close 2s” as well. They’ve shot 37.3% from 3, but are shooting under 46% on twos. It isn’t a surprise to see a major program struggle in the early going because attrition is always a big deal. The Jayhawks bid adieu to Devon Dotson and Udoka Azebuike from last season’s team.

Without those two standouts, Marcus Garrett is off to a slow start this season, shooting just 18-of-49 from the floor. Freshman Jalen Wilson has been a huge factor offensively and on the glass. Kansas is a top-50 rebounding team on both ends of the floor in this season’s small sample.

Passing judgment on Texas Tech is hard at this point in time. Per Bart Torvik, the Red Raiders have faced the 217th-ranked schedule. Ken Pomeroy says that Texas Tech has faced the 299th-ranked slate of offenses through seven games. Houston ranks 11th in that department for KenPom and Texas Tech lost that game. Kansas ranks 23rd.

Context is really important early in the season. Texas Tech is the nation’s top team in adjusted defensive efficiency, but they’ve played a very weak schedule. Houston had .967 points per possession. The eight three-pointers made by Houston remain a season-high against the Red Raiders. Texas Tech only had .801 PPP themselves in that game.

Against the second-best team the Red Raiders faced, Abilene Christian held them to .798 PPP on offense. Texas Tech needs these remarkable defensive numbers to stay in place until the offense can get going, but Kansas presents a much different type of challenge than most of the opponents TTU has seen to date. Holding Northwestern State to .726 PPP, Sam Houston State to .724 PPP, Troy to .691 PPP, Grambling State to .554 PPP…none of those teams are in the same stratosphere as Kansas.

These are two powerhouse programs that are trying to navigate the early-season waters. The fact is that Kansas’s body of work is far more impressive to date and there is simply nothing wrong with losing a game to Gonzaga, even if you allow 102 points.

In recent games, Texas Tech’s defensive rebounding has gone by the wayside. It sure looks like Kansas can win the battle on the boards here. It also looks like Texas Tech is in line for some regression based on the quality of competition to this point.