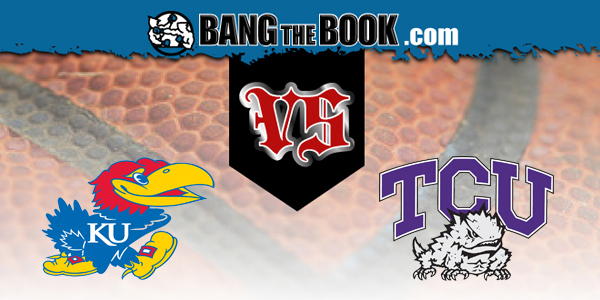 Let’s see if we can keep some Big 12 mojo going after yesterday’s easy winner on the over between West Virginia and Oklahoma State. Our focus will be on the latest tip of the night between Kansas and TCU.

The Horned Frogs are the host squad in Fort Worth for this one, but the money has been coming in on Kansas, as the Jayhawks are up to -5.5 in the markets with a total of 139 at Bookmaker Sportsbook. Citing the odds from Bookmaker brought us some luck yesterday, so we’ll do it again today and remind you that a 100% Deposit Match Bonus awaits with your first deposit.

Will it be Rock Chalk Jayhawk in this one? Or will the Horned Frogs come away with a cover and maybe even an outright upset? Let’s find out.

Bill Self’s bunch is coming off of a hideously bad performance against Texas over the weekend. Only 1,500 fans are allowed in Phog Allen Fieldhouse, but you can bet that their voices were heard in Kansas’s 25-point home loss to Texas. The Jayhawks went 3-of-23 from 3 and just 20-of-65 from the field as a whole in the 84-59 blowout loss.

You’d have to think that there is nowhere to go but up. Kansas is 8-2 on the young year with a 4-5 mark against the number. The game against Washburn was not lined. Kansas failed to cover in a four-point win over Kentucky and also in a one-point win over Creighton. They did cover with an outright win in Lubbock to start 1-0 in conference play.

The Jayhawks had .802 points per possession against Texas on Saturday. Meanwhile, the Longhorns scored 1.142 PPP. That was the second-worst defensive performance for Kansas. The worst came in the season opener against Gonzaga, but the Bulldogs will do that to a lot of teams.

There is still a ton of talent on this Kansas roster, even with last season’s departures. The problem is that freshman Jalen Wilson has outshined the returnees in a lot of ways. The upper classmen need to be better and more consistent for Kansas. The Jayhawks also need to get inside more frequently. They’ve been a bad jump shooting team this season, shooting just 29% from the mid-range and 35.6% from 3. The 35.6% does crack the top 100, but Kansas has struggled to shoot over the length of Kentucky and Texas.

Jamie Dixon’s TCU team lost a thriller to Oklahoma and followed that up with a non-conference loss to Providence. This is a little bit of a tough spot for TCU. They’ve only played once since December 22 and just played a really awful game against a Prairie View A&M team that ranks near the bottom 50 in the country.

In that game, TCU had .898 PPP, which was the second-lowest output of the season for the Horned Frogs. Their only game that came in lower was against Liberty, which was a bit of a surprise in and of itself. TCU ranks 57th nationally in 2P%, but 293rd in FT%. The Horned Frogs will have to get better at the line, especially in games projected to be close like most of their Big 12 contests.

Opponents are only shooting 28.2% from distance against TCU. They’ve really committed to defending the 3 and have been able to rotate in a lot of guys to keep the defensive legs fresh. North Dakota State is the only team to make more than seven three-pointers in a game against TCU this season.

Like I said, Kansas needs to get the ball inside. If they’re going to rely on the long-distance jumpers, they’re going to play right into the strengths of this TCU defense. If the Jayhawks are struggling defensively, they could resort to Hack-A-Sam, which means fouling TCU big man Kevin Samuel. The 6-foot-11 junior is shooting 65.3% from the floor and just 45.2% at the free throw line. In his collegiate career, Samuel is a 41.2% free throw shooter.

This looks like a down and dirty defensive affair. Kansas has played some elevated tempo games, but it seems as though they’ve just let the opponents dictate the pace. TCU is below average in tempo and Dixon’s team will probably keep slowing down as the season progresses. They were 320th in adjusted tempo last season.

Kansas can’t consistently get to the interior to get high-percentage looks and TCU defends the perimeter well. Kansas has seen better days defensively, but the Jayhawks still have length and athleticism and have been able to play quality defense without fouling.