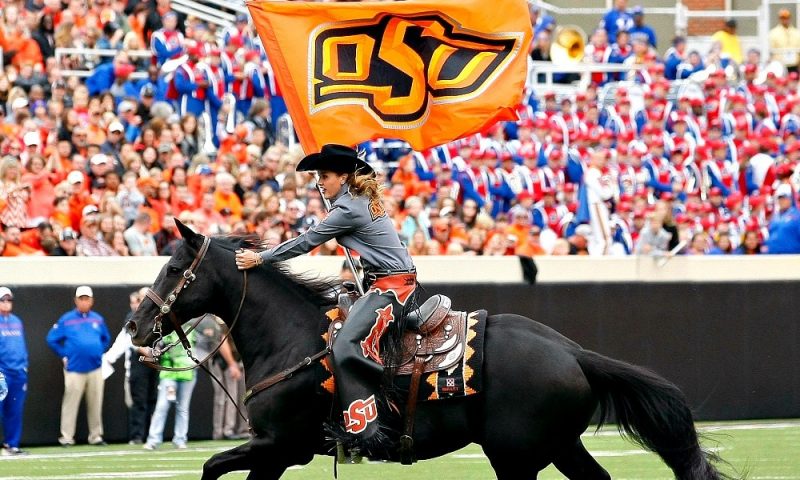 Week 9 of the 2021 CFB season brings a ton of interesting markets Saturday, October 23, so we’re taking a closer look at the Big 12 Conference battle at Boone Pickens Stadium in Stillwater to get you the best Kansas vs. Oklahoma State betting pick and odds.

Kansas scared the Sooners in Week 8

The Kansas Jayhawks (1-6; 1-5-1 ATS) are on a six-game losing streak following a 35-23 home loss to the No. 3 Oklahoma Sooners last Saturday. During their awful run, the Jayhawks have had some bright moments, and they battled bravely against the No. 3 team in the country.

Kansas outgained Oklahoma in total yards (412-398) and had the ball in possession for 35 and a half minutes. The Jayhawks kept the Sooners off the scoreboard in the first half, but it wasn’t enough for an upset. Freshman RB Devin Neal led the way for Kansas with 23 carries for 100 yards and a couple of touchdowns, while junior QB Jason Bean tossed for 246 yards and a TD.

Oklahoma State looks to get back to the winning ways

Junior signal-caller Spencer Sanders tossed for 225 yards and three touchdowns. The Cowboys held the Cyclones to a paltry 67 rushing yards on 33 totes, but they allowed Brock Purdy to complete 27 of his 33 pass attempts for 307 yards and a couple of scores.

Before a tough loss to the Cyclones, Oklahoma State had won three straight games over the top-25 teams by an average margin of 9.7 points. The Cowboys allow only 20.1 points per game (31st in the nation) on 316.7 total yards (19th).

The Cowboys are one of the best defensive teams in the country. Also, they are killing it against the spread, covering in five straight outings and five of their previous seven showings as favorites of 30 or more points.

This is a tough spot for the Jayhawks, who blew their chance against the Sooners. Kansas surrendered 35 second-half points last Saturday, and the Jayhawks will have a tall task to put 20-plus points on the scoreboard against this Oklahoma State team.

The Cowboys’ offense is not exactly a high-octane one, but Mike Gundy’s boys still convert 40.7 percent of their 3rd downs while tallying 25.7 points per game. Keep in mind their scary schedule, as the Cowboys have defeated some tough defensive teams, including Baylor and Kansas State.

The Cowboys shouldn’t have any problems moving the ball against Kansas. The Jayhawks will probably have to lean on their passing offense for all 60 minutes, and I can only hope they will score some points in garbage time. Last year, Oklahoma State trounced Kansas 41-7 as a 21.5-point road fave, and the over is 5-1 in their last six meetings overall.