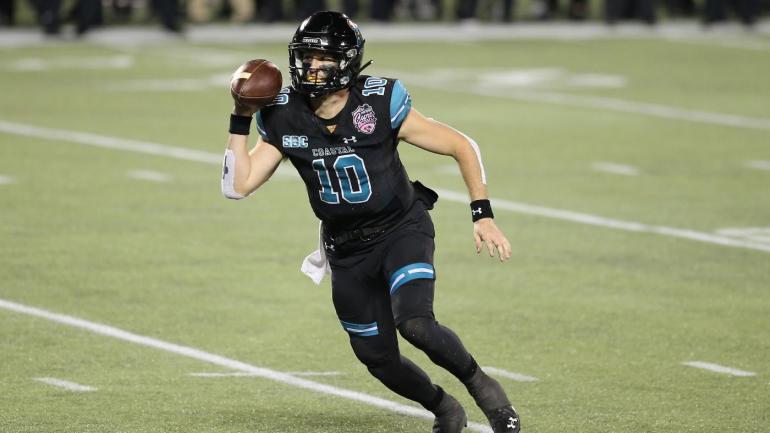 The 2021 college football betting action continues with Week 2 that kicks off Friday, September 10, with the non-conference showdown from Brooks Stadium in Conway, South Carolina, where No. 17 Coastal Carolina hosts Kansas.

We’ve prepared the best Jayhawks vs. Chanticleers betting pick and odds, so let’s take a closer look. The hosts opened as huge 25-point favorites on BetDSI Sportsbook, while the totals are listed at 52.0 points.

The Kansas Jayhawks have been one of the worst teams in the country over the last few years. They opened the 2021 season on the right foot, outlasting South Dakota 17-14 as 11.5-point home favorites to put an end to their terrible 13-game losing streak that started in September 2019.

After a couple of solid seasons with North Texas, junior QB Jason Bean joined the Jayhawks in 2021. He was a key player in Week 1, tossing for 163 yards and a couple of scores, including the game-winning TD with 70 seconds left in the fourth quarter.

The Chanticleers dismantled Citadel in the opener

The No. 17 Coastal Carolina Chanticleers kicked off the new season with a 52-14 thrashing of the Citadel Bulldogs in Week 1. They covered a massive 33.5-point spread while racking up tremendous 614 total yards.

Junior QB Grayson McCall threw for 262 yards and a touchdown, while six players combined for 266 rushing yards and five touchdowns. Senior RB Shermari Jones had nine carries for 100 yards and a couple of scores, while senior wideout Jaivon Heiligh posted six catches for 133 yards and a TD.

The Jayhawks meet the Chanticleers for the third straight season, and Coastal Carolina has emerged victorious in their previous two encounters while covering the spread on both occasions. I’m sticking with this trend, as the Chanticleers look like one of the best teams in the country at the moment.

The hosts shouldn’t have any problems beating the Jayhawks by 26 or more points. The Chanticleers have so many dangerous weapons on both sides of the ball, and I don’t see how the visitors will cope with them.

The Jayhawks have allowed 50-plus points in four of their last six outings. Their defense was terrible in 2020, and the Jayhawks could easily suffer a heavy loss Friday at Brooks Stadium. The Chanticleers will torture them all day long, so I’m a bit worried about the Jayhawks’ offense, but going with the over seems like the right move.

The total has gone over in nine of the Jayhawks’ last 12 games overall. On the other side, the over is 5-1 in the Chanticleers’ previous six games overall, and it is 5-0 in their last five showings in September.