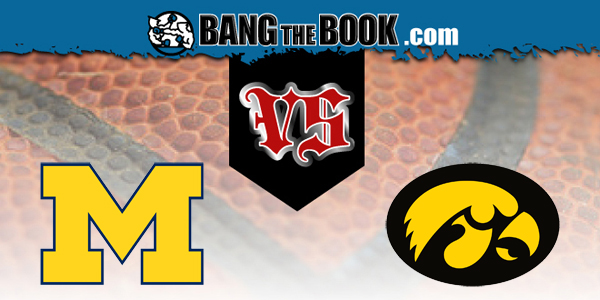 It’s going to be one of the most significant showdowns you can possibly see in the Big Ten this season, where two of the best teams in the country – led by two of the best big men – will clash.

The Michigan Wolverines, coming off a huge win over Ohio State, we’ll take on the Iowa Hawkeyes, who may provide the most difficult challenge for their defense all season long.

This tips off at 7 p.m. Eastern time at the Crisler Center in Ann Arbor, and as ESPN televises it live, BetAnySports customers can place wagers in real time, using the technology available through Sports Betting Prime.

These teams have not met yet this season, but that doesn’t mean there isn’t some familiarity at play. Luka Garza, Iowa’s superstar player who might be the front-runner to win the Naismith Award, has done some serious damage to the Wolverines. Last season, as the Hawkeyes visited Ann Arbor, he poured in 44 points, which is the most a visiting player has ever tallied at the Crisler Center. Unfortunately, Iowa came away from the game the loser.

And Garza will be challenged in the middle by freshman phenom Hunter Dickinson, the 7 – 1 star who played for the storied DeMatha High School program, and who led that 92 – 87 victory over Ohio State with 22 points and nine rebounds – five of them on the offensive end. In that game, MIchigan hit eleven triples and committed only seven turnovers, and they really had to be that good to defeat the Buckeyes. After suffering an upset loss against Minnesota – their only defeat of the season – Michigan has won five straight games. They come into this contest with a record of 16 – 1.

In the college basketball betting odds posted on this game by the folks at BetAnySports, Michigan is laying some points:

Iowa is the top team in the country in the metric of Adjusted Offensive Efficiency, according to the folks at Kenpom. Michigan is 6th in that category, so this may come down to who’s got the better defense. There is probably not a lot of argument that the Wolverines are the better team at the stop end, and their defense, which has allowed only 41.4% shooting inside the three-point line, may have the effect of pushing Iowa to the outside.

But the Hawkeyes don’t mind that, as it plays into one of their strengths. They are the fourth best team in the country from three-point range, hitting on 40.3% of their attempts. They have the kind of ball movement necessary to work for a good shot from downtown, and only one team in the country has turned the ball over at a lower rate.

What Michigan has going in its favor is that it’s a very good shooting team, from just about everywhere. The Wolverines are 16th in the nation in three-point accuracy, 15th in two-point shooting percentage and they hit 76.7% of their free throws.

Dickinson’s big game against Ohio State represents something of a bounce-back performance for him, as he has labored a bit on the offensive end priotr to that contest, averaging just 8.2 points per game in his previous five, making only 44% of his shots. And we’re talking about a guy you has converted 65% of his attempts for the season.

Garza and Dickinson and friends for quite a while; they knew each other from the days when they both were with the Team Takeover program in AAU ball. So both of them know what the other likes to do. But we have a feeling that Garza, who averages 24.7 points per game and shoots 44.4% from beyond the arc, still has some lessons to teach Dickinson, who can be prone to foul trouble, and as we discussed, not a model of consistency on offense.

This is obviously dependent upon Iowa being able to stretch out the Michigan defense by hitting some threes, but they have enough ammunition to be able to keep this close or pull off the minor upset on the road. So we are taking the points.