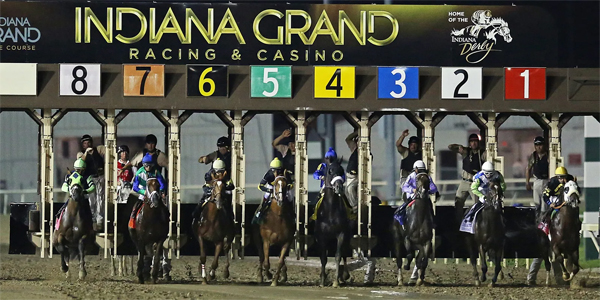 The Indiana Derby has become part of the Road to the Kentucky Derby with the altered schedule as a result of COVID-19. What we have is a Grade 3 points race now on July 8 at Indiana Grand in Shelbyville. It will be a late post on Wednesday night at 7:45 p.m. ET for the 10-horse field.

With the shift to make this part of the Road to the Kentucky Derby, the race will be run at 1 1/8 miles for the first time.

Let’s break it all down with a look at the 10 contenders and an analysis of the field:

Winning Impression drew the morning line favorite role at time of post at 3/1, but it is a rather precarious favorite role with Major Fed at 7/2 and Shared Sense at 4/1. All in all, this looks like a pretty open field, which is no surprise with a stronger three-year-old crop at Keeneland for the Blue Grass Stakes this weekend.

We’ll scan through all 10 horses and put together a $10 bet slip for the Indiana Derby:

It is tough to see this horse, which has some of the lowest speed figures in the field, being a primary factor.

Rider Florent Geroux teams back up with Brad Cox, so Brisset has recruited Luis Saez for the mount. This horse has had some strong speed efforts and would seem to be more of a factor than No Getting Over Me. Extraordinary also just ran at 1 1/8 miles, something most of the horses in the field have not done.

New rider Rafael Bejarano has a horse that has put up some good top-end speed, but just hasn’t been very consistent. That is the hard part about backing Taishan here. While the field is not loaded with speed, we don’t know what we’re going to get. Taishan does, however, have two data points at this distance.

This race doesn’t have the speed of previous races and this is a horse still owned by Godolphin, but the son of Street Sense just hasn’t fulfilled his potential. This could be the race and he could be sitting on a big speed performance, especially in a race without speed, but there aren’t a lot of data points that inspire confidence, but the distance might help. Street Sense was certainly a distance runner and this will be Shared Sense’s debut at 1 1/8 miles.

The speed in this race won’t be nearly what the speed was in the other races, when Major Fed finished behind legit Kentucky Derby candidates like Wells Bayou, Ny Traffic, Pneumatic, and what should have been one in Maxfield. He’ll be a very popular pick on Wednesday.

This field is a lot weaker than that one, but this has not really been a money horse throughout its career, with less than $70,000 in earnings. This seems like a bad morning line. The real favorite here is Major Fed.

Perhaps the light comes on here with Hartman as the trainer instead of Stanley Hough, but that is a big ask at this price. Disappointing fifth-place finishes in the Matt Winn, Gotham, and Swale have certainly soured opinions on this colt.

Major Fed should win this race. It is set up for him to win because this race does not have elite speed and he’s run well in some of the best fields. The distance will not be a problem either.

Extraordinary and Shared Sense are the other two that I like here, with the long shot maybe a more approachable option.