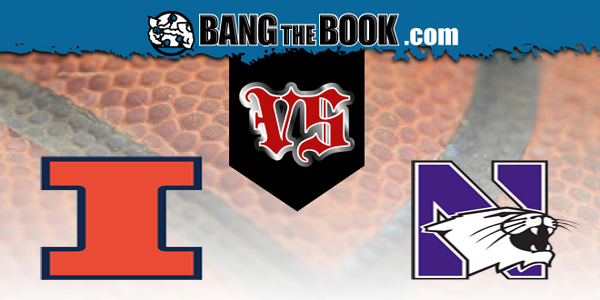 Playing in the Big Ten isn’t a whole lot of fun for teams that have to scratch and claw for every victory. Just ask the Northwestern Wildcats.

After starting 3-0 in conference play, the Wildcats have dropped two in a row and now have to pull an upset over Illinois to avoid falling to .500. BetOnline Sportsbook has the Wildcats +7.5 with a total of 150.5 against the Fighting Illini in Thursday night’s Big Ten Network battle with a 9 p.m. ET tip.

Early money has come in on both sides of this game from sharper bettors, so it looks as though we have a difference of opinion in the marketplace. Let’s see if we can find an opinion on Game 757/758.

Brad Underwood has an excellent team in Champaign, but the Fighting Illini have suffered some setbacks of their own. Illinois comes into this one 8-3 straight up and 6-4 against the number. Illinois has rattled off three straight wins and covers after a 91-88 loss to Rutgers on December 20. After a run of seven straight overs, the last two Illinois games have gone under the total.

Illinois doesn’t force a lot of turnovers and that appears to be the one glaring flaw with Underwood’s team. Oddly enough, in the game where the Illini had their highest TO% of the season, they lost 81-78 to Missouri. The other losses have been against Baylor and Rutgers. Baylor is one of the nation’s elites and Rutgers is a much improved, well-coached team.

A defensive crackdown suggests that Underwood has either made some adjustments or the team is simply giving more of an effort on that end of the floor. In wins over Indiana and Purdue, Illinois held the opposition to .903 and .840 points per possession. Those are two of their better defensive performances since beating bottom-50 teams NC A&T and Chicago State in the first two games of the year.

Illinois was held to under a full point per possession for the first time this season against Purdue, but still managed to win the game with exceptional defense. This is a top-10 offensive team that is shooting almost 42% from 3 and over 57% from 2. They are also a top-20 defensive rebounding team, so they’ve been able to limit second-chance points.

Illinois has played the 16th-toughest schedule thus far per Bart Torvik, so this is a battle-tested team with good numbers against some quality competition.

It would be an exaggeration to call Northwestern a giant killer, but consecutive wins over Michigan State, Indiana, and Ohio State opened a lot of eyes. It turns out that Michigan State isn’t as good as expected, but Northwestern isn’t the type of program that reels off runs like that against the conference’s better teams. All in all, Northwestern is 6-3 straight up with a 5-3 record ATS.

Head coach Chris Collins has seen his team completely fall apart defensively in the last two games. Iowa scored 1.274 PPP and Michigan scored 1.194 PPP in back-to-back blowout losses. Iowa won by 15 and Michigan won by 19. Now Northwestern is back in the friendly confines of home, where the Ohio State and Michigan State wins happened.

There are a few pretty noticeable flaws with Northwestern and they could pertain to this matchup. Against top-80 competition, Northwestern has been one of the nation’s worst offensive rebounding teams. In Big Ten play, they’ve struggled a bit on the defensive glass as well. Like Illinois, Northwestern also ranks in the bottom-50 nationally in TO% on defense.

They do, however, take better care of the basketball, but they’ve also played the 78th-toughest schedule. The Wildcats are firing away at a 40% clip from 3 for the season and 39.4% in Big Ten play. That has helped to cover up some of the team’s other deficiencies.

The three-point line will be a huge component in this game. In wins over Sparty, Indiana, and Ohio State, the Wildcats held the opposition to 19-of-69 from 3. In the losses to Iowa and Michigan, those two teams were 23-of-53. If we take away Illinois’s opening barrage of 17-for-31 against NC A&T, that brings them to 39.4% from 3.

The high total for this game is interesting. We do have two good offenses here, but Illinois played to 69 possessions against Purdue and 66 against Indiana. Those are two of their three lowest games in number of possessions this season. Northwestern’s Big Ten games have averaged 68.2 possessions per contest. Both teams are better offensively than they are defensively, but neither is a bad team on D.

Illinois looks like the play laying -7.5 here. The Illini have the better offense and if this renewed commitment to defense is legit, that should help them create a bit of margin. The free throw shooting should improve for Illinois as we go along. Kofi Cockburn is 54% from the line after being 67% last season. The team was around 73% last year. That should positively regress and hopefully this will be the spot for it.