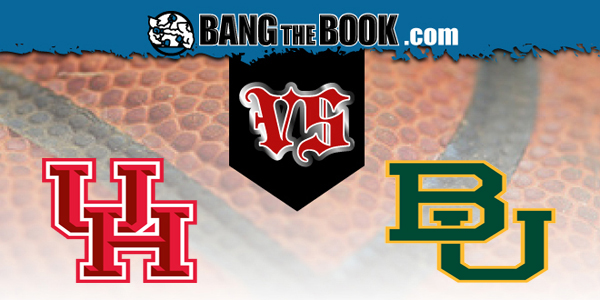 The Final Four is set. We’ll have the Battle of the Lone Star State between Houston and Baylor and then the Battle of the West Coast between UCLA and Gonzaga. Despite everything crazy that has happened this March Madness, we still get two #1 seeds, a #2 seed, and then an out-of-nowhere #11 seed in the Final Four. Some semblance of normalcy.

We’ll look at both games, obviously, but here is the preview for Houston vs. Baylor. Baylor is -5 per our good friends at Bookmaker Sportsbook with a total of 135 in the matchup that features the champion of the South Region vs. the champion of the East Region.

The Cougars have not had the toughest of paths to the Final Four. An opening-round win over Cleveland State was like a controlled scrimmage before a game that was way too close for comfort against Rutgers. Syracuse and Oregon State advanced to the Sweet 16 and the Elite Eight, respectively, so the #2 seed Houston played four double-digit seeds to get to this point.

Sure, slowing down an Oregon State team on a heater is impressive to a degree, but Houston has not performed well offensively since that Cleveland State win and has won on the back of its defense. The Cougars have posted eFG% marks of 44.1%, 44.2%, and 41.1% in the last three games. Going 11-of-32 from three against Oregon State was the deciding factor, as the Cougars only made 9-of-30 two-point shots.

This is not a great offensive team. The Cougars are terrific on the offensive glass and have taken great care of the basketball. Other than that, this is a team that ranks 137th in eFG% offense, 111th in 3P%, and 191st in 2P% per Bart Torvik. They’ve struggled to make a lot of shots and played in a pretty weak AAC. Houston’s strength of schedule ranks 95th overall per Torvik and 96th per Ken Pomeroy.

Defensively, though, this is a world-class squad. The Cougars are eighth in adjusted defensive efficiency per both Torvik and KenPom. They lead the nation in eFG% defense at 43.3%. They’re fifth in 2P% defense, 12th in 3P% defense, and 10th in Block%. They protect the rim extremely well and have also done a good job forcing turnovers.

That is a concerning stat to me. Houston has been as good or slightly worse defensively in this tournament as their full body of work while playing four double-digit seeds. Now Baylor awaits, as far and away the best team Houston has played this season.

The Baylor Bears have had a much tougher road. They downed Hartford in the first round, but then played Wisconsin, Villanova, and Arkansas. Those are all top-20 caliber teams and actually rank 13th, 12th, and 19th for Ken Pomeroy. Houston’s last three opponents rank 38th, 41st, and 43rd.

Baylor has won those games by 13, 11, and nine points, though the Arkansas game could have been finished by an even higher margin. Baylor was in control of that game for the most part throughout. The Bears never trailed in the game.

Baylor’s defense was the big question coming into this tournament. Arkansas did score 1.051 points per possession in the game, but was limited to just 3-of-11 on threes. Hartford had .715 PPP in the opener. Wisconsin followed with .982 thanks to a 50% day from two and an 8-of-21 performance from three, but that game was never close. Villanova had just .887 PPP. Baylor has defended the three-point line pretty well overall and has continued to win the turnover battle in lopsided fashion.

That will be the key for Baylor in terms of running away with this game. In the four NCAA Tournament games so far, Baylor has 29 turnovers. Opponents have 69. Nice. To be fair, 24 of those belong to Hartford, but Villanova was one of the best teams in the country at taking care of the basketball and Baylor forced 16 turnovers in a game played to just 57 possessions.

If Baylor doesn’t win the turnover battle, we’ll have to look to the glass. Both teams are extremely adept at pulling down offensive rebounds, but Baylor struggles a bit on the defensive end in that department. Houston is pretty pedestrian as well. This should be a tough, rugged, physical game on the glass. These teams are second and seventh in ORB%, with Baylor trailing slightly.

That being said, Baylor projects to make more shots as the vastly superior offense. Baylor leads the nation in 3P% and is in the top 50 in 2P%. Houston can only dream of making that many shots on offense.

There are a lot of similarities between these two teams, but also a lot of differences. Baylor has the far better offense, but Houston has the better defense, at least in terms of keeping shots from going in the basket. However, Baylor has faced the 80th-ranked schedule by opposing offenses and Houston the 118th. That gap is even wider here as far as NCAA Tournament teams go.

Both teams are good on the offensive glass and suspect on the defensive glass. Houston is a much slower team from a tempo standpoint, but Baylor has played two slow-paced games in this tourney and held Arkansas to a slower pace last game.

All in all, I have to look at Baylor -5. I know the metrics sites are much closer to a pick ‘em here, but I feel like we know a lot more about Baylor against top competition. The Bears have played 10 Quadrant 1 games to just three for Houston and those games were Syracuse, SMU in January, and Texas Tech around Thanksgiving. Baylor seems to have fixed any of the issues from the COVID pause. I’m on Daaaaaa Bears.