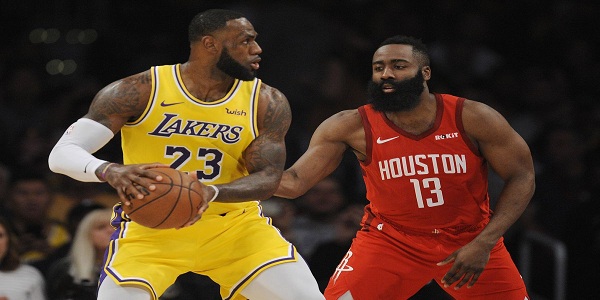 The Houston Rockets and Los Angeles Lakers split their first two encounters of the season, so they will decide the regular-season series winner Thursday night at Staples Center in Los Angeles. The Lakers beat the Rockets 124-115 as 3.5-point road dogs on January 18, while the Rockets bounced back with a terrific 121-111 victory as 6-point dogs at Staples Center on February 6. The Rockets will try to clinch their series with the Lakers for the seventh straight year.

Houston is coming in full strength, while the Lakers will be without Dion Waiters who’s still waiting on his debut in a new jersey. However, the Lakers head coach Frank Vogel stated that Dion will need some time to acclimate on the team’s system.

The Lakers opened as 6.5-point favorites at Betonline, Bovada, and BetDSI. The total has been set at 230.5 points at Betonline and Bovada, while BetDSI set a one-point higher line.

The Rockets are tied with the Thunder for No. 5 seed in the West, trailing one game behind the fourth-seeded Jazz. On the other side, the Lakers are topping the Western Conference, five and a half games ahead of the LA Clippers. The Lakers are three games behind the Milwaukee Bucks in the race for the best record in the league.

Houston is coming off a 117-111 victory over the Minnesota Timberwolves as a 12.5-point home fave this past Tuesday. The Rockets put an end to a four-game losing streak. The Lakers snapped their four-game winning streak on Tuesday, suffering a narrow 104-102 loss to the Brooklyn Nets as heavy 12-point home favorites.

Back in February, I’ve got burned on the clash between these two teams. The Rockets’ small-ball basketball had a debut with Robert Covington as their tallest guy, so I was thinking there’s no way the Lakers won’t beat the Rockets. Covington hit a couple of clutch threes, and the Rockets beat the Lakers by 10 points.

Russell Westbrook was unstoppable on that February 6, accounting for 41 points on 17-for-28 shooting from the field. James Harden had only 14 points to go with seven assists and a couple of steals. The Rockets made 19 triples out of 42 attempts from deep (45.2%), while the Lakers hit just nine out of 31 attempts (29.0%). As I expected, the Lakers outscored the Rockets in the paint (62-40).

The Rockets have been struggling recently with their small-ball lineup. Before they outlasted the T-Wolves on Tuesday, the Rockets have suffered four straight losses to the Knicks, Clippers, Hornets, and Magic. All these four teams had an identical game plan, so guys like Ivica Zubac dominated the Rockets in the paint.

The Lakers are playing in a better form than the Rockets, and I expect them to do a much better defensive job than they did in the previous meeting with the Rockets. You never know with Mike D’Antoni’s team, but the Lakers’ inside game should be a key factor. Therefore, I suggest you take the Lakers to cover. Also, you can buy a few points and take the hosts as 4-point favorites at slightly lower wages. The Lakers are 4-1 ATS in their last five games, while the Rockets are 0-5 in their previous five outings.

When it comes to the totals, I would go with the over, but the Lakers to cover are still my first choice. The Rockets love to push the ball in transition, playing at the fourth-fastest pace in the league. The over has hit in 11 of the last 15 meetings between the Rockets and Lakers including one of their previous two encounters this season.