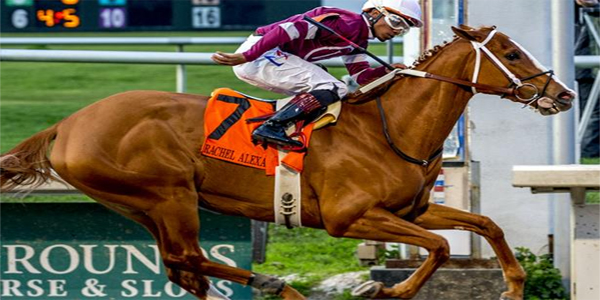 Learning how to bet the ponies just might be the only way to get your gambling fill during the coronavirus outbreak. To this point, just about everything except for the horse racing circuit has shut down. It may only be a matter of time, we’ll have to wait and see, but there is no time like the present to familiarize yourself with betting on horses.

Last week, we took a look at the Rebel Stakes. I opted to skirt the favorite Nadal, who essentially went gate-to-wire for the win, going off as a 4/5 favorite. It was a very impressive performance for the favorite and also for the place finisher, Excession, who started slow at the back of the back, made a huge push up the rail, and nearly had enough to take down the favorite in the muck and mud.

This is the first race in the second leg of the Road to the Kentucky Oaks series and it looks to be a race for second place. The favorite, Finite, was listed as the 3/5 morning line favorite. Finite also drew the outermost post position, so the race to the front should be unabated.

Here are the horses, trainers, jockeys, and odds from the morning line for the 2020 Fair Ground Oaks:

Let’s look at the six horses in the field and put together a profile:

Antoinette – Antoinette comes in off of her first win, which came in the Tepin Stakes at Aqueduct. The daughter of Hard Spun went 1 1/16 miles in 1:38:87 for a strong time to hold off I Dare U and Quality Heat. I Dare U was actually the even money favorite in that two-year-old filly race. Antoinette stalked the pace for most of the race before sliding down at the rail to beat I Dare U over the final furlong and a half. And she just scampered to the victory in her dirt debut.

This will be her first race since then for legendary trainer Bill Mott. Interestingly, Alvarado was in the irons on Stretchthestory, who went off at 23/1 in that race. It was a patient and calculated ride from Joe Bravo. Will Alvarado take the same tact? If so, will Antoinette have the speed in a stronger race, particularly to chase down Finite?

French Rose – French Rose comes off the shelf for the first race in nine months after a couple of maiden special weight (MSW) races at Santa Anita. This seems like an odd choice for J. Keith Desormeaux to bring this filly all the way from California to run in a race where she seems to have no chance. There must be a method to the madness.

Tempers Rising – The third favorite on the board comes from the camp of Dallas Stewart. Julian Leparoux will be in the irons for this powerhouse team that has had a couple of underwhelming finishes at Fair Grounds to this point. Tempers Rising finished fourth in the Rachel Alexandra Stakes back in February and third in the Silverbulletday Stakes in January. In fact, Tempers Rising has yet to win a race.

The daughter of Bayern, who won the Breeders’ Cup Classic back in 2014, has run at 1 1/16 miles twice in her career. The distance shouldn’t be a factor for her, but she has been bested by Finite twice already, so making the board is a possibility, but winning the race does not seem to be. Her familiarity with Fair Grounds and the cohesiveness of Stewart and Leparoux could really help in the quest for second.

Bonny South – Another excellent team here as Brad Cox and Florent Geroux team up once again with Bonny South. We don’t have a whole lot of data points for Bonny South, but we have one and it was impressive. In her allowance race at Oaklawn last month, she beat Shedaresthedevil in a sprint to the finish. Shedaresthedevil just won the Honeybee Stakes at Oaklawn back on March 7.

There are some additional layers to Bonny South being in this race. We could have seen Taraz in the Fair Grounds Oaks. She won the Martha Washington Stakes at Churchill Downs and the Letellier Memorial at Fair Grounds, but suffered a catastrophic injury during a workout last month and had to be euthanized. It was reported that Taraz was going to run the Honeybee Stakes and not this race, so perhaps Bonny South was built better for the distance all along.

Cox is having some tough luck of late. An injury to Mr. Monomoy, thought to be a solid Derby contender, has put him on the shelf. One other note here is that Cox is also the trainer for British Idiom, who finished second to Finite in the Rachel Alexandra. It is a different ownership group, but Cox very much knows what he is up against.

Stop Shoppin Tammy finished fourth in her maiden at Saratoga last year before coming to Fair Grounds for a win in her maiden there in mid-February. She went gate-to-wire in that one and comes in with a little momentum here off of a terrific workout time. She is also on Lasix for the first time, so we’ll see how that goes for her.

Finite won the Rachel Alexandra on this very track by nearly five lengths last month. She beat Breeders’ Cup Juvenile Fillies winner British Idiom in that race and has won five straight races overall. She’s won the Golden Rod Stakes and the Rachel Alexandra at this distance, so she won’t be bothered by that. This will also be her third race at Fair Grounds along with the Silverbulletday, which she also won.

So, who do we take alongside Finite? There are only six fillies in the race, so we want to be somewhat selective after Finite in an exacta or a trifecta. The horse that I prefer for second is Bonny South. Brad Cox knows fillies. Even with Taraz, prior to her tragic passing, and British Idiom in his group, Cox pointed Bonny South to this race. Munnings is the sire of both Finite and Bonny South and it should be a Munnings 1-2 finish.

Antoinette and Tempers Rising are both of interest in exotics. Antoinette’s excellent time in the Tepin Stakes came with a really strong close. Tempers Rising is a Dallas Stewart filly and even though she hasn’t had the results, we know he’s solid with the girls. I’m still finalizing my card with regards to the exotics, but will play Finite and Bonny South together and separately.

Post time is set for 5:15 p.m. ET on Saturday March 21 and the race will be shown on NBC Sports Network.