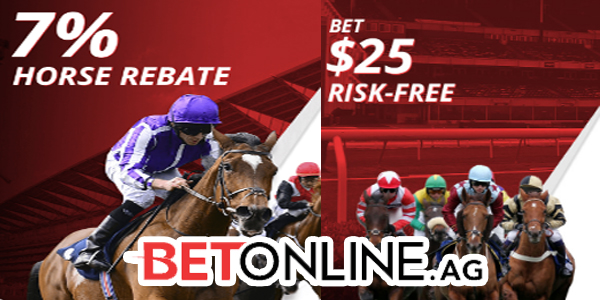 Do you remember in the movie “The Sting” when Paul Newman’s character, when setting up his mark, said that “I haven’t met a poker player yet who doesn’t want to beat the ponies”?

Well, we’re not sure we know ANYBODY who doesn’t want to beat the ponies, if given the opportunity. And BetOnline wants to give people that opportunity, with the extras they offer in their world-class Racebook.

When we say “world-class,” we really mean it, as we’ll explore a moment.

There’s almost nothing that rivals the sheer excitement of a great horse race, particularly one where the stakes for the participants are very high. Most casual followers tend to pay attention the most to the Triple Crown races (Kentucky Derby, Preakness Stakes, Belmont Stakes) , but there’s a whole lot more to enjoy, including the Breeders Cup, which has grown to the point where it is now a two-day event.

To say that BetOnline answers the call on these race days would be a vast understatement. But at the same time, it is also only part of the story.

The point is, they answer the call and satisfy the cravings of horseplayers every day of the week, every week of the year.

You will not find any major racetrack in all of North America that isn’t covered. So you can bet anything – the stakes races, the allowance races, the claimers, the maiden races – whatever you’re looking for.

And there are no borders either. Do you want to go to Woodbine in Canada? Newcastle or Newmarket in the UK? Dundalk in Ireland? Longchamp in France? Durbanville in South Africa? nakayama in Japan? That’s no problem in this racebook. And you’ll find that they handle all the major harness tracks as well.

No stone is left unturned. And that certainly includes the inducements for customers to keep on playing.

When you start out with the Racebook, you can start with a bit of a bang. That means you’ll get a free $25 horse racing bet. That is real value, and these folks want you to get the most out of it, to the extent that if you don’t win with that wager, you are going to get reimbursed by them. Yeah, that’s almost unheard of, but they will give you a free play worth up to $25.

And horse racing enthusiasts will be pleased to know that they can get “paid back” on a daily basis. The Racebook does that in the way of a daily rebate. Those people who access the Racebook via the internet (accessible through computer, tablet, smartphone) will receive a 7% daily rebate. And they won’t impose limits or requirements on you, which means that you don’t submit a minimum amount of wagering volume, nor is there a ceiling on how much you can earn through this rebate.

That, ladies and gentlemen, is an offer that crosses the finish line first.

Check out the BetOnline Racebook and take advantage of a multitude of wagering options, at a multitude of locations, and earn while you go. If you’re pretty good, you can wind up ahead of the game!