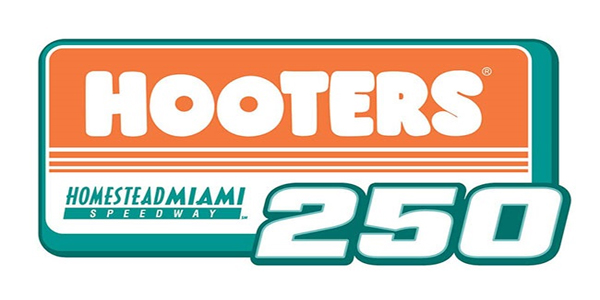 Some NASCAR sponsors require a Google search to figure out what the heck they are. The Xfinity Series race on June 13 at Homestead-Miami Speeway requires no such search. Well, then again, maybe it is a popular search term. The Hooters 250 is this week’s Xfinity Series event in South Florida and will serve as the ninth race of the season.

Oddly enough, the Xfinity Series will actually run back-to-back races at Homestead-Miami in the span of 20 hours to catch up with the Cup Series and make up for the lack of a race at Martinsville. The second race will be the Contender Boats 250 and will precede Sunday’s Cup Series race.

This will be a really interesting weekend for the Xfinity Series. Racing, particularly in hot and humid conditions, takes a lot out of the drivers. It is physically draining and demanding. The idea of running back-to-back days, which the Cup Series will do at Pocono the end of the month, was unheard of until this season.

So, we’ve got odds for the Hooters 250 because it is the first race, but just keep in mind that these driver notes and stats will carry over to Sunday’s Contender Boats 250 as well.

Here are the Hooters 250 odds from 5Dimes Sportsbook:

Chase Briscoe once again finds himself the favorite for an Xfinity Series race, but the second name on the board is the one that will catch the most eyes. Dale Earnhardt Jr. will be in the #8 Chevy for the first time this season. He tends to run one or two Xfinity Series races per year. He ran fifth at Darlington last year and fourth at Richmond two years ago. This will be his first Xfinity Series start at Homestead since 2008. He stopped driving in the Cup Series full-time in 2017.

On name recognition, he sits second on the board, but he isn’t a good bet at that price in any way, shape, or form.

Briscoe ran third at Homestead last year after finishing 13th the year prior. He’s got a win as Las Vegas on a 1.5-mile track, but has finished 20th and ninth on the other 1.5-mile loops. He is a deserving favorite having his two wins and two other top-five finishes, but it might not be a bad idea to look around for somebody else at a better price.

Justin Allgaier is still looking for his first win of the season. He came close at Bristol with two stages wins and the most laps led, but eventually finished 18th. He was sixth last time out at Atlanta and fifth at Charlotte. Chevrolet has back-to-back wins here thanks to Tyler Reddick and Allgaier has gotten some wins on traditional ovals like Phoenix, Indianapolis, Dover, and Chicagoland, but he hasn’t scored a top-five finish at Homestead since his return in 2016. His +660 price isn’t bad, but we’re moving further down the board.

Austin Cindric led the most laps and won the first two stages last week at Atlanta, but it was AJ Allmendinger that scored a rare win. Cindric is also +660 this week, but he has run much better on the 1.5-mile tracks than the guys ahead of him. The Columbus, Ohio native was fifth in 2018 and seventh in 2019 at Homestead. It sure looks like his Team Penske #22 car has a lot more speed this season. He’s the preferred choice at +660 and the preferred option among the short prices.

Noah Gragson was the runner-up last week at Atlanta and finished fourth at Homestead last year. He’s got a nice price at +800. His JR Motorsports Chevy has been part of the manufacturer’s resurgence across both circuits this year. After going winless last year, he already has two wins this year. He’ll be another popular pick, especially in Tyler Reddick’s car from the 2018 win.

This isn’t the kind of Xfinity Series race where you want to look for surprises. Clean, 1.5-mile races like this one are all about equipment and teams. One of the favorites is going to win and that will be true of both the Hooters 250 and the Contender Boats 250 on Saturday and Sunday of this weekend.