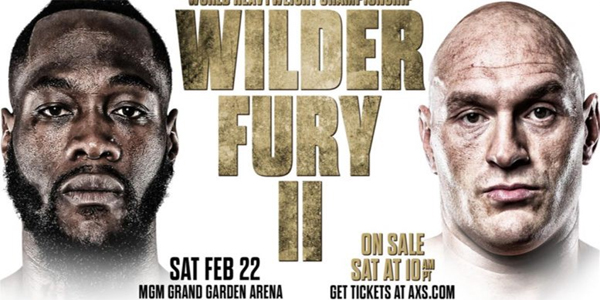 As Tyson Fury and Deontay Wilder got ready for a weigh-in on Friday for their Saturday fight at the MGM Grand in Las Vegas, the edict came down from the Nevada State Athletic Commission, which oversees such affairs:

There would be no “face-off” for the cameras before or after the weigh-in.

“In my 25 years in boxing, I’ve never heard of an administrative body stepping in and prohibiting a faceoff,” said Todd duBoef, who runs the day-to-day operations at Top Rank for his stepfather, Bob Arum. “It’s the pinnacle moment before the fight. I am just shocked. That’s the money shot, and not having that is frustrating.”

It might be, but the way combatants have managed to get themselves into skirmishes at weigh-ins and press conferences almost as a matter of routine, it has become almost clownish. It’s as if these guys think the judges will be awarding points for it.

And I doubt it sells many tickets as a stand-alone plug.

So the fight will sell – or not sell, as it were – on its own merits. And this rematch of their December 2018 draw has considerable merit. The first go-around took on some added thrills when Fury, knocked down and presumably out by a Wilder combination in the 12th round, got up, finished the round, and earned himself a draw. It’s a rematch that absolutely should happen, and there’s a reasonable argument to be made that it will determine who’s got bragging rights as the best heavyweight in the world.

Here are the boxing betting odds, as they appear at BetAnySports:

This fight isn’t all that complicated to handicap. What does each guy have to do to win? Well, when it comes to Fury, he has to use whatever boxing skill at his disposal to outscore Wilder, while at the same time avoiding getting nailed with that big right hand. For Wilder, well, it’s getting to Fury with the big right hand.

There are some people – and I mean estimable people in the boxing industry – who believe Wilder may be the hardest-punching heavyweight EVER. That may or may not be true, but you would have to rank him AMONG the hardest hitters. And he has done much of that while weighing less than 225 pounds, which, by 21st Century standards, would make him small-to-medium sized for the division.

So now we get to what might be the most important factor in this fight. Something has told the six foot-nine inch Fury that he had to “bulk up” a little more for this fight. So he has gone on an aggressive eating schedule and weighed in yesterday at 273 pounds. This was not a complete surprise; he had been open about the fact that he’d be aiming for about 270. But does this do him any favors?

If his goal is to knock Wilder out, and figures he’s got to put more weight behind his shots, than maybe it would make sense. But he was already going to have a weight advantage of 25-30 pounds, even if he came in around the same as he did the first time these guys fought (256.5).

From my vantage point, I see no edge coming out of this for him. Remember what he has to do – avoid being a stationary target for Wilder’s power shots. So let me ask you: does the extra weight make him more able to elude Wilder’s best stuff, or less so?

You can answer that question for yourself.

For a long time, we have heard from the camps of fighters about how they can maintain speed and stamina at the higher weight, in addition to adding more strength. In some extreme cases (like Michael Spinks moving up to heavyweight to beat Larry Holmes) this has been true. But in most instances – Andy Ruiz’s lax effort against Anthony Joshua in the rematch is a prime example – the reverse has been the case. It’s usually a myth.

And if you’re one of those people who thinks a change in trainers – as Fury has made – somehow brings a magic formula to the table, you should start thinking differently.

As for Wilder, his weight of 231 is only two pounds above his previous high weight. And that’s actually something that might be expected when fighting such a big opponent. For a fighter who is 6’7″, it is, I dare say, natural.

My assumption is that Wilder is going to land his big shot at some point in this fight. Maybe more than that. And if Fury isn’t in real good physical shape, that amounts to trouble. Wilder at -130 is my “win” pick, because I don’t believe Fury has improved his condition, but I am kind of torn on the distance prop, frankly.

My instincts tell me to go with the “under,” which, as you can see, is at -110. But at the same time, I can see, if these guys lose some stamina, that they could make the action very sluggish in the latter stages (if it gets there, of course). I also may be in the minority in the sense that I believe Wilder can win the fight on points, if he has to, because his jab is better. And if he throws it more than he did last time, he’ll get more results out of it. A lot might depend on whether something Fury delivers can get his attention early. It might send him into a more defensive mode.

And keep in mind that “Wilder by Decision” pays +775 at BetAnySports, where you can find all kinds of props on the big title bout. Remember that also, when you turn to football or basketball, you’ll get reduced juice, as well as real-time wagering through Sports Betting Ultra…….. Open an account by using your debit or credit card, person-to-person transfers or the virtual currency of Bitcoin, which is fast and easy with their automated system, and NEVER incurs a transaction fee!