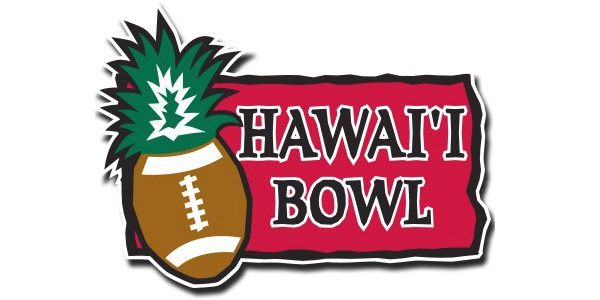 It seems like a holiday tradition that the Hawaii Rainbow Warriors will be hosting a post-season game in their own stadium, doesn’t it? Actually, they don’t qualify for a bowl every year, but nine of the last ten times they have done so, they have been in Aloha Stadium at some time around Christmas. This season, Hawaii will play host to the BYU Cougars on Christmas Eve (December 24) at 8 PM ET in Honolulu.

Remember that if you are a BetAnySports customer, you’ll be able to get reduced juice before the game starts, and then place wagers while things are in progress, thanks to what is available with two different options – Sports Betting Ultra and Live Betting Extra.

Hawaii (9-5 straight-up, 7-7 ATS) is not that difficult a team to analyze, because they are about offense, and specifically the passing attack, as head coach Nick Rolovich employs a variation of the Red Gun offense that was used for years by June Jones. And they definitely know how to move it; the’ Bows were 13th in Total Offense, sixth nationally in passing yards and averaged 33.6 points per game. Only four quarterbacks in the country threw for more yardage than Cole McDonald, yet there were times where he was inconsistent enough that Rolovich pulled him out of the lineup and inserted Chevan Cordeiro, more of a dual threat, and that often supplied a useful change of pace. Cordeiro, however, injured his ankle in the regular-season finale against Army and, after sitting out the Mountain West title game against Boise State (a 31-10 defeat), his status would be uncertain for this one.

Speaking of a quarterback situation, BYU has started three different players in that position. After Zach Wilson went out with an injury, Jaren Hall, a true dual threat, was inserted, but then he went down and Baylor Romney (yes, Mitt’s nephew) became the starter, sometimes throwing to his brother, Gunner. Now Wilson, a 63% passer, is back in the lineup.Romney is available and Hall is questionable because of concussion problems.

In the NCAA football betting odds posted on this game by the folks at BetAnySports, BYU – which is officially listed as the home team here – is favored in what is actually a road game:

In the last two seasons, McDonald has thrown for 65 touchdowns, but the flip side is that he’s thrown 14 interceptions as well. Hawaii is error-prone, having committed more turnovers than any team in the country (30), and they are also one of the most penalized teams in the nation.

BYU, which currently operates as an independent, has overtime wins over USC and Tennessee, defeated geographic rival Utah State in what was a very satisfying outcome, and also dealt Boise State its only defeat, although it must be noted that the Broncos were without quarterback Hank Bachmeier in that one. In terms of offense, there was nothing they did that was all that jaw-dropping, and notably they were 123rd in the nation in red zone offense. Hawaii has had problems all season long stopping the run, allowing 5.8 yards per carry, and it remains to be seen how well BYU can exploit that, as the Cougars are missing the guy who is by far their most explosive running back, Sione Finau (6.1 ypc), who is out with an ACL injury.

The Cougars didn’t let things get out of hand too often, as they allowed just 24.4 points per game, and four of their five losses came against quality teams (Utah, Washington, Texas and San Diego State), with the only clunker a defeat suffered at the hands of South Florida. But they only had twelve sacks, and this has to be a big concern on the part of head coach Kelani Sitake, who was known for having a ferocious pass rush when he was defensive coordinator at Utah. If they can’t get significant pressure on McDonald, things become more problematic. And let’s take note of the fact that Hawaii also has some diversion, with a ground game that averaged better than five yards an attempt, featuring tailback Miles Reed (891 yards). BYU’s depth in the secondary wil be severely tested, as Hawaii has four different wide receivers with over 800 yards. And there were some pretty decent results for the Warriors on this home field, as they beat Arizona, Oregon State, San Jose State, San Diego State and Army.

It’s not as if we expect that BYU is going to feel like strangers in a strange land out on the island – in fact, they actually have a sister campus in Hawaii – but the fundamentals of this matchup suggest that the ‘Bows are going to be in this all the way to the end and will be able to do many the things they want to do on offense. So we’re moving with the home underdog.

BetAnySports makes it a real bonanza for NCAA football bettors during bowl season. When you get reduced juice, you’re getting a better deal on the odds, as you can avoid laying the customary -110 (check the website for details), and once the game has started, you can place real-time wagers with options like Sports Betting Ultra and Live Betting Extra.…… They also make it convenient to open up an account, allowing you to use your debit card or credit card, person-to-person transfers or the digital currency of Bitcoin, for which they NEVER charge a transaction fee!