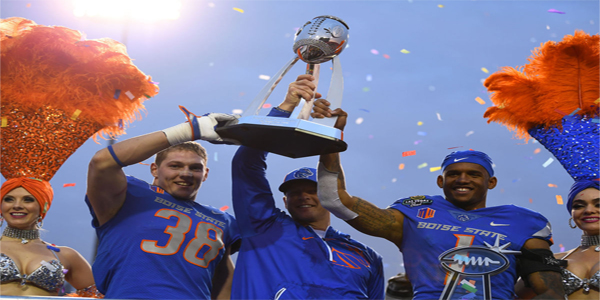 College football and NFL betting odds are pretty much going to be all that we’ve got while the coronavirus outbreak continues to grip the planet. With hope and optimism that a football season will be played, sportsbooks are trying to come up with creative ways to entice action and get people back to the book to place some bets.

Four of the five power conferences have favorites at minus prices. Only one has such a price for the Group of Five, so this could be an area where we have the opportunity to make some money with some astute futures bets.

Here are the Group of Five conference champion odds as of March 31 at 10 a.m. ET:

UCF is the rightful favorite in the AAC with returning quarterback Dillon Gabriel. Gabriel posted a 29/7 TD/INT ratio as a freshman and helped lead the Knights to a 10-win season. The swing game was against Cincinnati, in which UCF was -3 in turnover margin and outgained the Bearcats by 82 yards. They’ll be at home for this season’s rematch.

Memphis is the likeliest team to emerge from the West Division for the AAC Championship Game, but Brady White finally exhausted his eligibility and head coach Mike Norvell went to Florida State. The Tigers promoted Ryan Silverfield and also made a splashy hire bringing in former Colorado head coach Mike MacIntyre as the defensive coordinator. They should win the West, but Navy always gives Memphis fits and the Middies got back on track last season.

At +1400, Navy has the most value with no UCF on the schedule and Memphis at home. Memphis also has to play UCF. Those are two games that could define Navy’s chances.

Conference USA looks to be pretty balanced this season. It could very well come down to the schedule and which games are at home and which games are on the road for these teams for the 2020 season. Florida Atlantic and UAB were in the championship game last season, but Lane Kiffin has gone on to Ole Miss and UAB narrowly got past Louisiana Tech and Southern Miss to get there, as the Blazers went 9-5 with a +22 point differential and Southern miss was 7-6 with a +5 point differential.

Louisiana Tech has some losses and some guys to replace, but they do seem to be one of the more consistent teams in the conference year in and year out. They will be a young team, but a talented team.

UAB probably wins the West and any of the West teams are likely to be an underdog to the East winner, but we can go value hunting here.

Middle Tennessee State is the team on my radar. The Blue Raiders probably have the conference’s most dynamic QB in Asher O’Hara. The defense was battered by injuries last season. A lot of guys got experience out of necessity and will play bigger roles in the near-term. At +2500, MTSU has a tough road, but has some Power Five-caliber talent and gets Western Kentucky and FAU at home.

For all the preseason love that the Ohio Bobcats get, they haven’t won a MAC Title since the 1980s. They are consistently one of the better teams in this conference, but it is a prolonged drought in Athens. Though they are the favorites this season, a +325 price tag hardly makes them a big favorite. Quite the contrary.

Now Ohio loses Nathan Rourke, who was worth as much to Ohio’s power rating as any quarterback in the country to his respective team. If Ohio couldn’t get over the hump with Rourke, how can they be better off this season?

That means that there should be some semblance of value in the MAC, right? Well, maybe not. A lot of these teams are pretty interchangeable. Miami won all five games decided by one score, so they could regress. Buffalo has some losses on defense that could be problematic. All we know for sure is that Akron and Bowling Green will be bad.

Of the East teams, Buffalo looks to be the least vulnerable. A +400 price may not feel all that attractive in a toss-up league like this, though.

On the West side, Central Michigan looks to build off of huge gains in the first year of the Jim McElwain era. Quinten Dormady, the Tennessee transfer, was excellent and CMU also had a terrific running game. Unfortunately, Dormady is gone and part-time starter David Moore has another month left of his PED suspension, so the Chippewas will have to figure some things out early in the season.

Western Michigan and Toledo all have questions, ranging from quarterback to the defense. Toledo does seem to have the best all-around coaching staff in the MAC with the addition of Mount Union’s Vince Kehres and a new defensive coordinator.

Let’s be nice and call it parity in the MAC. The fact of the matter is that the MAC is just completely filled with question marks. Buffalo just might have the fewest at +400.

The Mountain West generally belongs to Boise State and could once again as evidenced by the -200 price tag. The Broncos do play at Air Force very early in the season and have to go to Hawaii, but Nick Rolovich is now at Washington State and Boise State plays Georgia Southern in Week 1 before taking on a second straight option attack. Boise State tends to have some trouble with Air Force, but they’ll have an offseason’s worth of prep for the option with back-to-back games against it to open the year.

In other words, things set up very well for Boise State, especially if Hank Bachmeier is healthier at the start of the year. Air Force, who finished out last season with eight straight wins, does avoid San Diego State and won’t have to go all the way to Hawaii, so their schedule sets up favorably, too. Donald Hammond III is back as well. The Mountain Division looks like a two-team race with Jordan Love out of the picture at Utah State.

On the West side, it’s hard to see a challenger for San Diego State. Nevada was a deeply-flawed team last season and Hawaii, who actually won the division title, lost Rolovich. It was thought that Rocky Long might be retiring, but instead he went to be the defensive coordinator at New Mexico, where he’ll incorporate his 3-3-5. Brady Hoke is back at the helm for SDSU.

This is a tough conference to find value. It looks like Boise State is the only team with a really good shot to win it.

App State and Louisiana were clearly the class of the Sun Belt Conference last season. They would appear to be again this season. The two teams are scheduled to play October 7 and would likely play again in the conference championship game. The Mountaineers annually seem to have issues with Georgia Southern and do go on the road to face the Eagles right after the clash with the Ragin’ Cajuns.

Louisiana plays the year-end rivalry game at UL Monroe and also plays at Appalachian State, but does avoid a Troy team that should be better this time around.

If Louisiana can get the championship game at home, the +225 price ends up looking relatively attractive here.

Arkansas State is kind of interesting at +1400, though the Red Wolves play at App State and at Louisiana. They’d likely need to steal one of those to have a decent chance. Last year was a tough one with the passing of Wendy Anderson, the wife of head coach Blake Anderson. The Red Wolves rallied late in the year to finish on a high note, but it was clearly an emotional season.

I’d need a little bit better on their price because they’d have to beat App State at the end of beat either App State or Louisiana in the regular season to have a chance, if not both, but they seem to have a decent ceiling again this year.

Louisiana +225 makes some sense, given that the Ragin’ Cajuns would be no worse than a pick ‘em at home in the title game if they got there.

Blackjack — The Wonders of Soft Doubling