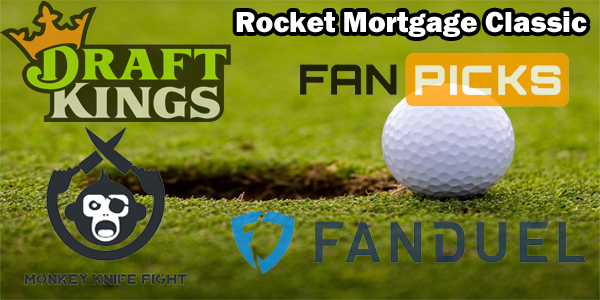 DFS players will face a tough slate for this week’s Rocket Mortgage Classic. A lot of reliable players that came in at bargain bin salaries in previous weeks are now more expensive because the field is much weaker overall. Detroit Golf Club became the site of a putting tournament last year, but the expectation is that the rough will be a little thicker and a little higher in hopes of curtailing scoring this year.

Last year’s cut line was 5-under, the highest on the PGA Tour since 2016, so it makes sense that tournament officials are hoping to make things more challenging.

Kevin Kisner ($7,700) – Kevin Kisner might be a little on the high side, but we’ve known him to be a very good putter in his career. This season, the flatstick has failed him a little bit on the dance floor, but he is a solid all-around player that usually uses that putter to his advantage. If he can do it this week, he’ll be in great shape at Detroit Golf Club. Kisner did not putt well last year, but made the cut and was in the green in all of the other strokes gained departments. He has missed the last two cuts, so his current form is in question, but there is upside to be had with so much emphasis on putting at this event.

Brian Stuard ($7,400) – Do we have a home court advantage here? Brian Stuard is a Jackson, Michigan native and he played his college golf at nearby Oakland University. It sure looked like he knew the course last year when he finished fifth and led the field in SG: Putting. It made up for some of his other shortcomings enough to get that top-five finish, but this really was about putting and approach last year. Stuard does rank in the top 75 in SG: Putting and fifth in driving accuracy. If the rough is more penal for the bigger, less accurate hitters, Stuard’s fairways and greens approach may be good enough for a high finish.

Michael Thompson ($7,100) – Michael Thompson snagged a top-10 finish at the RBC Heritage when he was eighth down in Hilton Head. He couldn’t replicate the feat last week, as he finished 46th, but he did fire an opening-round 64 before falling off the pace. Thompson putted well and had some nice approach shots, which are two important categories at Detroit Golf Club. He putted well last year, but failed to make the cut at 2-under. He’ll have to improve, but a lot of the value options this week are deeply flawed players with a much weaker field. There are a lot of Hail Marys being thrown with this group this week.

Kyle Stanley ($7,100) – Does Kyle Stanley have a second straight good week in him? Stanley was strong last week at the Travelers, as he finished tied for 24th with a couple of 65s on Friday and Saturday. Stanley ranks sixth in driving accuracy, so he should be able to keep it between the deep cuts and he played really well on approach here last year en route to finishing 21st. Stanley was sixth in SG: Approach per DataGolf last season in the Rocket Mortgage Classic. Last week, Stanley was 11th in SG: T2G. The pickings are definitely a little slim with the value guys, but Stanley turned in a couple of low rounds last week and played well enough here last year to be under consideration.

Peter Uihlein ($7,000) – Peter Uihlein has not played since the Charles Schwab Challenge, where he finished a strong 14th with four rounds in the 60s. Uihlein is 15th in birdie or better percentage on par 4s this season. The par 5s are all very gettable for the field this week. The par 5s were all birdie or better holes last season. The par 4s were a lot trickier. Par 4 scoring will likely be the difference, as those were mostly the only holes that played to par or better at this inaugural event last year. Uihlein hasn’t played in a couple of weeks, which is concerning, but he played well at the CSC. He, too, missed the cut here last year, but shot 4-under and was the victim of some bad luck off of the tee.