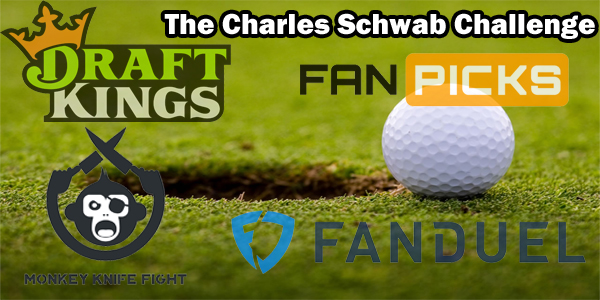 The Charles Schwab Challenge is a sight for sore eyes for DFS players. It has been a long time without a golf tournament and it’s safe to say that NASCAR and UFC probably are not cutting it for a lot of the DFS population. Fortunately, a really terrific field is on hand at Colonial Country Club for the CSC and that means a lot of good DFS opportunities.

Our weekly article at BangTheBook is focused on the value grabs. The guys with upside that you can use to fill out your lineup if you’ve got one or two spots to fill and you’re running a little low on salary cap funds. It’s easy to load your lineup with stars, but it’s not easy to make those last couple of decisions. That’s what we look to do.

With that in mind, here are five value plays to consider this week in DFS matchups with salaries from DraftKings:

Kevin Na ($7,600) – Why wouldn’t you consider the reigning champion at a price point like this? Colonial tends to come down to putting and few can get hotter with the flatstick than Kevin Na. Let’s put it this way, Na has three rounds of 62 or lower in the last two years in this event. He won it last year going 70-62-69-66. He was fourth in 2018 with an opening-round 62 and a final-round 61. He ranks seventh in SG: Putting this season over 30 measured rounds. He’s played well this season with over $2 million in winnings, including a victory in the Shriners Open. All of these guys are going to be on pretty equal footing with a long layoff, so the guys that get a feel for the putter the quickest are in great shape. That would be a guy like Na.

Kevin Kisner ($7,600) – So nice, we’ll do it twice at that price. Kevin Kisner is also a past winner at Colonial and also an excellent putter. Kisner has been in the top 30 in SG: Putting each of the last four years. He sits a respectable 82nd right now, but he seems to like the surface at Colonial quite a bit. He did miss the cut last year and finish outside the top 50 in 2018, but he won in 2017 and finished in the top 10 in 2016. He had three top-20 finishes before the ish hit the fan with the ‘rona and has played pretty well across the board, ranking just outside the top 100 in SG: Off-The-Tee, SG: Around-The-Green, and SG: Total. He is a solid grab at a solid price for an event where he generally plays well.

Ryan Palmer ($7,400) – Stepping away from great putters for a second, Ryan Palmer has done everything pretty well except for putt this season. He’s in the top 20 in SG: OTT and ranks 84th in SG: Total. His putting and his scrambling have been his downfalls, but the Amarillo native knows this course very well and has had the results to back it up in recent years. Palmer tied for sixth last year and tied for third back in 2016. He had a couple of bad rounds in 2018 and 2017 that led to unfortunate finishes, but his awareness of the course should help while a lot of guys are trying to feel their way around off of the long layoff. Palmer has eight top-10 finishes since the start of the 2018-19 season, including two during the 2019-20 campaign.

Cameron Smith ($7,300) – This one is my ace in the hole. This is an outstanding price on Cam Smith, who really fits the profile of this course. The 26-year-old Aussie ranks in the top 10 in SG: Putting this season. He played great on the fall swing, specifically in the Pacific events, but the long layoff gave him a chance to figure some things out. Smith has sprayed it off the tee a little bit, but he ranks 52nd in driving distance and has played really well around the green. He doesn’t have the record of success at Colonial that the rest of the players have, but he is a guy that can trust his putter at an event where putting is really important. Smith sits in the top 40 in the Official World Golf Ranking right now, a testament to how well he has been playing with 16 top-10 finishes since the start of 2017. At a price point like this, he is tough to pass on.

Andrew Putnam ($6,800) – This is my other ace in the hole. If you are running really low on money from taking the guys perceived to be the most trustworthy in the field, then Andrew Putnam is for you. Putnam has only played Colonial twice, but he’s finished 20th and third in his two starts down in Texas. He’s sixth on the PGA Tour in SG: Putting this season. Other parts of his game have been a bit of an issue this season, but a lot of variables are in play this week. Putnam gets to come off the shelf at a course where he is clearly very comfortable with two of the better finishes of his career. Again, we’re not expecting miracles at this price point, but if you’re low on money, you’re looking for somebody to make the cut and get you some points. Putnam certainly makes enough putts for that and has two strong showings to his name at this course.