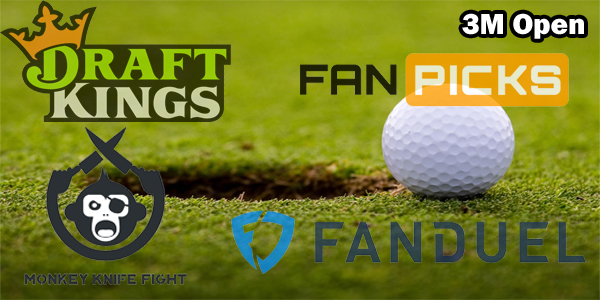 Another week, another PGA Tour event. With a WGC event on the horizon next week and the Memorial in the rearview mirror, we have a watered-down and weaker field at TPC Twin Cities for the 3M Open. A lot of the players that we would have considered value buys in recent weeks are now priced with salaries that exclude them from the purposes of this article.

We’ll have to dig a little deeper this week to figure out what to do with the 3M Open. This is another course where SG: Approach appears to be one of the most important metrics, but we also only have one year worth of course data because this was an inaugural event last season.

Salaries are from DraftKings as we take a look at the best potential bang for our bucks with some DFS value plays for the 3M Open:

Ryan Armour ($7,600) – Ryan Armour returned to the Columbus area and had a disappointing outcome in the Workday Charity Open. Maybe the newfound expectations were too much for the former Buckeye. In any event, Armour, who was not in the Memorial field, can look to get back to his top-10 ways at TPC Twin Cities. Armour was T-6th in the Travelers Championship and T-4th in the Rocket Mortgage Classic, due in large part to his iron play. He had 45 birdies and an eagle to go against 14 bogeys and a double over those events. Armour tied for 42nd here last year, but putted well and fits the course profile nicely. He was sixth at TPC River Highlands, which is a comparable course to this one per DataGolf, and sixth in the Valspar Championship last year at Innisbrook, which is the most comparable course to this one.

Dylan Frittelli ($7,600) – Dylan Frittelli hasn’t found much in the form of consistency in his five events since the return, but he did have a top-10 finish at the RBC Heritage and snared a top-25 result last week at the Memorial. Frittelli was among the best in SG: Approach last year in the 3M Open, but really struggled with the putter. He was 13th in SG: Tee-to-Green and fifth in SG: APP, so there is a blueprint here for him to play well, so long as he can get a few putts to fall. Frittelli has been pretty good overall with his iron play since the return. If he can coax his putter to show up, the low-to-medium risk/high-reward strategy we’re looking for in this article could come to fruition.

Troy Merritt ($7,500) – We tried with Troy Merritt last week and he came up short. The changes to the course format really hurt him, as he went from T-22nd in the Workday Charity Open to a MC in the Memorial. We’ll go back to the well with Merritt here, though, as he had a strong showing with a top-10 finish here last year. He was one of the best putters in the event, but did a little bit of everything well. Merritt also putted well three weeks ago in the Rocket Mortgage Classic. He was fifth in SG: APP for the Workday Charity Open. One thing has been off each week. We’ll see if he can put the total package together for us this week.

Denny McCarthy ($7,100) – Denny McCarthy is back in full swing now after playing all 72 holes at the Memorial. McCarthy shot an opening-round, bogey-free 67 at the Travelers Championship, but then had to withdraw because of a positive COVID-19 test. McCarthy was off to a nice start at TPC River Highlands, which is a comparable course to TPC Twin Cities. Another comparable course is Sea Island for the RSM Classic. He was T-8th there earlier this year. He finished T-23rd at the 3M Open last year. McCarthy was also T-9th last year at the Valspar at Innisbrook. Given the comparable courses to this one, McCarthy may simply fit the course profile pretty well as a long shot guy with a low cost.

Luke Donald ($6,600) – Luke Donald didn’t play this event last year, but he did play the Valspar Championship at Innisbrook and he finished tied for ninth. He played really well with his irons and wedges and rolled in a few putts. Per DataGolf, the closest comp to what matters at this course is what matters at Innisbrook. Therefore, Donald looks like a player that should have a little bit of a horse for course skill set. Donald ranks seventh in the Course History Index metric at DataGolf for his 34 career rounds at Innisbrook. We don’t have course data for this event, but Donald did open 69-65 last month at the Travelers Championship at TPC River Highlands, which is another comparable course to TPC Twin Cities. The bottom of the barrel is thin this week with the light field, but Donald could surprise at a really cheap price.