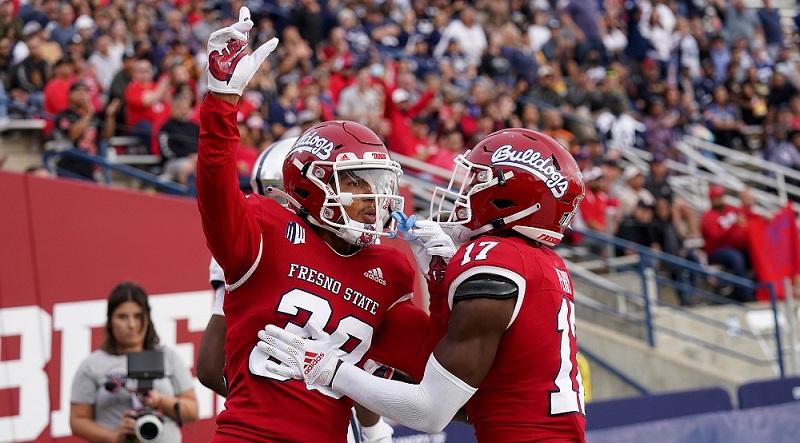 The college football betting action continues Saturday, October 30, with Week 9 matchups, including the battle for the top spot in the West Division of the Mountain West Conference, so we bring you the best Fresno State vs. San Diego State betting pick and odds.

The Bulldogs head to Dignity Health Sports Park in Carson as small 1-point road underdogs on BetOnline Sportsbook. Fresno State sits at +105 moneyline odds, while the Aztecs are listed at -120 with a total of 44.5 points.

The Bulldogs outlasted Nevada in a shootout

The Fresno State Bulldogs (6-2; 5-3 ATS) are coming off a 34-32 victory to the Nevada Wolf Pack last Saturday. They failed to cover a 3.5-point spread in front of the home fans, but the Bulldogs improved to 3-1 in the conference play with the fifth win in their last six outings.

Fresno State nearly blew a double-digit lead against Nevada, allowing a whopping 476 passing yards and 523 in total. On the flip side, the Bulldogs carried the ball 30 times for 205 yards, while Jake Haener threw for 256 yards and a couple of touchdowns.

Haener is having a solid senior year. He’s already tossed for 2,582 yards, 22 touchdowns, and six interceptions. The Bulldogs’ offense ranks ninth in the country in passing yards per game (341.0) and 22nd in points per game (35.6). Senior RB Ronnie Rivers leads the backfield with 115 totes for 573 yards and four touchdowns, while junior wideout Jalen Cropper has recorded 55 catches for 580 yards and 10 touchdowns.

The Aztecs shut down the Falcons to extend their perfect run

The San Diego State Aztecs improved to 7-0 SU and 5-2 ATS on the season following a 20-14 victory at the Air Force Falcons in Week 8. They upset the odds as 3-point road underdogs, holding the Falcons to 259 total yards and forcing a couple of turnovers.

Senior QB Lucas Johnson completed 11 of his 13 passing attempts for 72 yards, while senior RB Chance Bell led the way with eight carries for 50 yards and a TD. Another senior RB Greg Bell added ten totes for 42 yards, and he’s been the Aztecs’ best player so far this season, recording 603 rushing yards and five touchdowns.

Frankly, this game could easily go either way, and I’m going with the visitors only because of their passing offense. The Bulldogs might have enough firepower to hurt the Aztecs through the air, but they also need to deal with San Diego’s powerful ground game.

We should see a back-and-forth battle, and the betting trends won’t help much. These two schools meet for the first time since November 15, 2019, when San Diego State beat Fresno State 17-7 as a 2-point home fave, and the Aztecs are 3-2 SU and ATS in their previous five meetings with the Bulldogs.

The under has hit in the last seven encounters between the Bulldogs and Aztecs, while each of their previous six meetings has produced fewer than 38 points in total. I would ride this betting trend and take the under, looking for both teams to put on a strong defensive performance.