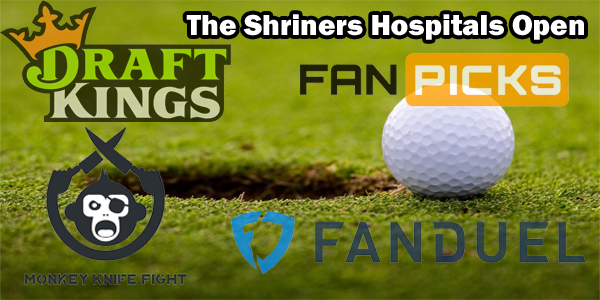 We’ve got a good-looking field this week at TPC Summerlin for the Shriners Hospitals for Children Open. We’ve also got the chance of lots of low scores this week, as the winning number regularly goes into the 20s under par.

There are quite a few big names on hand and those guys have drawn really big salaries. We’ll be doing what we always do with the DFS articles to look at the guys that come at cheap prices to see if we can grab some high finishers at a low cost. In a field like this, you have to look at the best of the best with a course that plays well for ball strikers and putters, but that doesn’t mean the bargain bin is bare.

Salaries are from DraftKings as we look at the top value picks for the Shriners Hospitals for Children Open:

Kristoffer Ventura ($7,100) – When you look at Kristoffer Ventura, you think Kevin Na. Well, at least I do. The full statistical profile is not stellar, but the putting is almost always on point. We saw a putting tournament last week in which Ventura snagged a T-6th and another accurate putter, JT Poston, snagged a top-five. Na won this tournament last year solely because of his putting. The other parts of his game didn’t hurt him, but they didn’t totally help either. Ventura, who has two top-10 finishes and a top-20 finish in his last six events, has that type of putting upside. He was fourth in SG: Putting last season. Similarly, if you wanted to go a little more expensive, Denny McCarthy is $7,700.

Luke List ($7,000) – This is a course that does not really penalize players for putting it in the rough. It’s about distance and striping irons. Once you get to the green, if you putt extremely well, you’re in contention. If you don’t, you can still be in contention as long as your ball striking is good. Luke List hits the ball a long way. He’s also actually played really well here in his career. He was 13th last year and has three top-20 finishes in his three starts. Using the DataGolf Course History Index, List is the fourth-best player here when adjusted for field strength in strokes gained over his 12 rounds. Only Patrick Cantlay, Bryson DeChambeau, and Webb Simpson grade higher and those guys are third, second, and first in price.

Rory Sabbatini ($7,000) – Is it crazy to say that Rory Sabbatini might be back. Sabbatini finished T-12th last week at the Sanderson Farms with a 68-66-69 over his last three rounds. That looked a lot more like the player that we saw when play resumed in June. He was T-14th at the Charles Schwab, T-21st at the RBC Heritage, and then T-17th at the Workday Charity Open. Sabbatini putted extremely well in the Sanderson Farms last week and has played pretty well this calendar year. He’s missed the cut in five of the last six here, which means ownership should be low if he has found a new form cycle.

Pat Perez ($7,000) – Pat Perez tends to play well in warm vacation destinations. The Phoenix native plays well at coastal courses and in warm weather and it’ll be plenty warm for him this week. Perez was actually third in this event last season and seventh back in 2017. He did not play well at the Sanderson Farms last week, but he was T-21st and T-9th the two previous events. He got a head start heading back to the desert, where he should feel right at him with some god performances in this event in the past.

Maverick McNealy ($6,900) – It was a roller coaster ride last week with Maverick McNealy at the Sanderson Farms. He had 23 birdies and an eagle, but also 11 bogeys and a double. He wound up T-17th with all things considered. McNealy led the field in SG: Putting last week, which is a good skill to have heading into the Shriners Open. He was eighth in SG: Putting in this event last year. He’ll have to be better with his approach shots, but putters find ways to hang around here if you are running out of money.