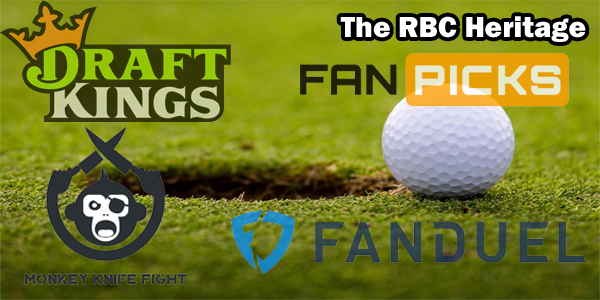 We move on from the Charles Schwab Challenge at Colonial to what is typically an Invitational event at Harbour Town Golf Links in Hilton Head, SC. This year’s version of the RBC Heritage has one of the strongest fields ever for this event and also has been expanded to 155 players.

Last week’s DFS value picks did not do particularly well, so we’ll hope to do better this week with a more recent data point than what we had to work with from before the COVID-19 shutdown. A really strong field means that we should have some more opportunities once again in that quest to fill out the roster.

The goal here is to find some value picks that you can pair with your higher-dollar players in order to fill out the remainder of your six-man roster. Salaries are from DraftKings.

Matthew Fitzpatrick ($7,900) – This is a little higher of a dollar amount than I typically like to go, but Matthew Fitzpatrick has the chance to do really well this week. This Pete Dye/Jack Nicklaus design has some links elements to it, which should certainly play to the strengths of a guy like Fitzpatrick. Fitzpatrick played really well in the return at Colonial. He was fifth in SG: Putting at +5.401. He also hit a lot of fairways, coming in tied for 15th in driving accuracy. His iron play held him back a little but, but he finished in the 70s with each round and it looked like he used the downtime to his advantage. He hasn’t finished higher than 14th here, but the timing of this tournament is better for all involved as it no longer follows the Masters.

Branden Grace ($7,800) – Branden Grace sprayed the ball all over the place at Colonial, but scrambled well and putted for dough en route to finishing tied for 19th. Grace managed to finish dead last at 39.29% in driving accuracy, but still cracked the top 20. He was 17th in SG: Putting and 18th in SG: Approach. Grace has played well at Harbour Town in the past, including a win back in 2016 sandwiched between an 11th and a seventh. He has to feel good about how he did last week, despite the situations he put himself in off the tee. That’s good enough for me this week at a reasonable price point for a past winner.

Ian Poulter ($7,600) – Ian Poulter also rolled it well last week. He came in 20th in SG: Putting, which made up for his 52% showing off the tee in terms of playing from the short grass. Poulter scrambled well enough and putted well enough to finish 29th. He’s had some success at Harbour Town, so this pick satisfies both the recent form and the course form crowd, as he has back-to-back top-10 finishes at Harbour Town and also has an 11th and an 18th to his name. Once again, this tournament no longer follows the Masters, so it will help out a lot of the guys that regularly play here. There are 63 players in the field that did not play at Harbour Town last year. Poulter is pretty much a regular.

JT Poston ($7,500) – The North Carolina native enjoyed his first official PGA Tour trip to Harbour Town, as he finished sixth here last year. He was 10th last week at Colonial, as he used his quality putting to his advantage by finishing 14th in SG: Putting. Poston was also in the top five in driving accuracy. Like Colonial, this isn’t a course where you need to be a big hitter. Fairways, greens, and good putts are the flavors of the day yet again and Poston has been good in those areas. His first career win came last year at Sedgefield in the Wyndham Championship, so the Carolinas have been kind to him.

Rory Sabbatini ($7,200) – This one is probably my favorite pick of the week, but I like to list them by price. Rory Sabbatini looked good last week finishing 14th in Texas. Sabbatini was the fourth-best putter in SG: Putting, trailing only Jordan Spieth, Richy Werenski, and Patrick Reed. Sabbatini tied for 17th in driving accuracy with winner Daniel Berger and top-10 finisher Gary Woodland. Sabbatini also has four top-10 finishes at Harbour Town dating back to 2009 and has two additional top-20 finishes. He was 10th last year. Sabbatini is a guy that thrives on these shorter courses and he has a great opportunity to put up some low numbers again this week.