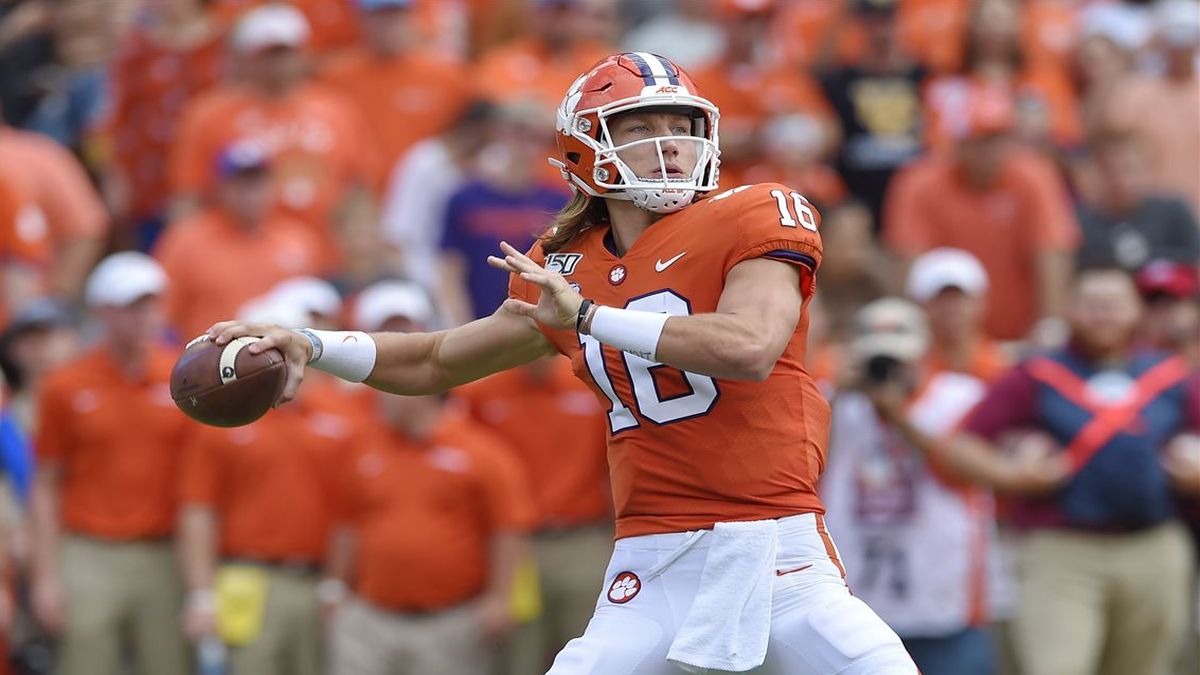 Sportsbooks are busy working on creative ways to entice action and generate interest. Right now, that seems to be an expansion of football betting odds. The NFL Draft is going to draw substantial betting handles, but a lot of futures are being posted. Power ratings are being completed earlier than ever and some people are already on to schedule analysis and a deeper dive into specific teams.

BetOnline Sportsbook did its part once again to release some odds and generate some interest with Monday’s college football conference champion odds. Props to them, as all 10 conferences were posted with both the Power Five and the Group of Five leagues.

Let’s take a look at the Power Five conferences with a little blurb on each one of them:

A price of -600 implies an 85.71% probability that Clemson wins this division. While the Tigers may have a tougher time running the table with a trip to Notre Dame on the schedule, Trevor Lawrence and Clemson are heavy favorites to win the ACC and will probably end up in the College Football Playoff again.

Quite frankly, you’d be insane to look at anybody in the Atlantic Division outside of Clemson. Louisville should finish second again with another year under Scott Satterfield, but Louisville would have to win head-to-head at Clemson to have a chance and that won’t happen.

So, the only option is to look at the Coastal Division and hope that the Clemson money line is small enough to hedge in the ACC Championship Game. North Carolina would be my pick, as the Tar Heels have sophomore sensation Sam Howell ready to build off of a dynamic freshman season with 38 touchdowns against seven interceptions.

UNC avoids Florida State, Clemson, and Louisville from the Atlantic Division. The Tar Heels are on the road at both Virginia and Miami, but those are still very winnable games.

North Carolina +1000 would be the only consideration for me, but that price may not be enough to go head-to-head with Clemson in Charlotte.

Ohio State continues to pace the Big Ten in terms of recruiting and a strong argument could be made that the team was even better under Ryan Day than it was under Urban Meyer. Justin Fields is back for another go and even though Ohio State lost a ton of players on defense to the NFL, the Buckeyes are able to reload with minimal interruption because of their talent pipeline.

It is an annual tradition for people to talk themselves into Michigan, so that will happen again this year. The Wolverines do get Wisconsin and Penn State at home, so they do have the chance to run the Big Ten table before the Ohio State game in November. Still, you could probably get something in the realm of +300 for Michigan against Ohio State in November, so why take the +350 now?

Penn State is a better value at +1000 with the Ohio State game at home. The Nittany Lions would have to go to Michigan, but they avoid both Wisconsin and Minnesota. If you want somebody outside of Ohio State from the East, Penn State is the only option.

In the West, things are relatively wide open. Minnesota is expected to take a step back, as evidenced by the futures odds. Wisconsin played well with Jack Coan, but loses Jonathan Taylor. If Purdue had a friendlier schedule, the Boilermakers added Bob Diaco as the defensive coordinator and should have an improved offense with Jack Plummer at the helm for another year, but they play at Michigan, at Minnesota, and would still have to play Wisconsin and Iowa at home.

Speaking of Iowa, they play at Ohio State and at Penn State, so that will make things very tough for them and limit the margin for error. Maybe, just maybe, the door is open for Scott Frost and Nebraska. Of course, they also play four road games in a five-game stretch at Rutgers, at Ohio State, Penn State, at Iowa, at Wisconsin from October 24 to November 21 and then play on a short week at home against Minnesota.

It might have to be Wisconsin by default because the other hopefuls play very tough schedules.

Ah, yes. The annual tradition of Texas being overrated. In essence, Texas is the only team being given a really good shot to compete with Oklahoma. Oklahoma State is a fairly distant third, with Iowa State and Baylor behind that.

The reality is that every team in the Big 12 except for Oklahoma and Baylor lost at least four conference games last season. Baylor could fall off in a big way with Matt Rhule now in the NFL and that seems to be the expectation. The fact that Matt Campbell stuck around in Ames was something of a surprise.

A -125 price on Oklahoma really isn’t that bad. The Sooners are clearly the class of the conference again and will have another offensive juggernaut. Maybe the defense will take a step forward. Oklahoma just seems the most consistent. Laying -125 on a bet like this isn’t easy, but it looks like the only option.

The Pac-12 is clearly wide open for the upcoming season. Of the conference odds at BetOnline, only the MAC appears to be more open than the Pac-12 with Ohio favored at +300.

The song remains the same about the Pac-12. There are a lot of good teams, but no team that could be considered great. Oregon loses Justin Herbert. Washington loses Chris Petersen and Jacob Eason, so they’ll have a new-look offense in some respects. UCLA is in Year 3 of Chip Kelly and maybe this is the time for the Bruins to take a step forward. Kyle Whittingham’s Utes are always solid, but how high is the ceiling after some big losses from last season’s roster.

Oregon avoids Utah and UCLA and gets USC and Washington at home. That, in and of itself, probably makes Oregon the north favorite. Stanford is at home as well, though the Cardinal aren’t what they used to be.

The best player in the conference now could be USC QB Kedon Slovis. Unfortunately, USC’s recruiting rankings have taken a hit and there aren’t many supporters of Clay Helton out there. USC is a deserving second favorite and could very well win the division and play in the Pac-12 Championship Game, but the South is a mess. Oregon, despite being the favorite, looks like the pick here.

What do the LSU Tigers have in store for an encore? That is a big question heading into the season. Joe Burrow is in the NFL and a bunch of Tigers opted to geaux to the NFL, including several juniors.

Georgia is the only team from the East Division to win the SEC since 2008 and that happened back in 2017, when Auburn beat #1 Alabama in the Iron Bowl before losing to Auburn. Had Alabama beaten Auburn, the West would probably be on an uninterrupted 11-year run of terror.

Is this the year for Georgia or Florida to break through? LSU seems vulnerable with all the losses to the NFL and maybe Alabama won’t be on its usual level for one reason or another.

Florida at +600 is actually rather interesting. Kyle Trask played really well last season and the Florida defense was excellent. The Gators could very well find themselves in Atlanta against Mac Jones and the Crimson Tide. The thing about that potential matchup is that you’d probably be able to get Florida at a really nice plus price on the money line that takes away the uncertainty of things like playing Georgia in Jacksonville or having to play LSU and at Tennessee.

Outside of Georgia, any East representative in the SEC Title Game is a big dog, so why not just hold off and take somebody like Florida at that point? If Alabama gets there, and they probably should, they are much bigger than a -125 favorite, so there is technically some value in them here.