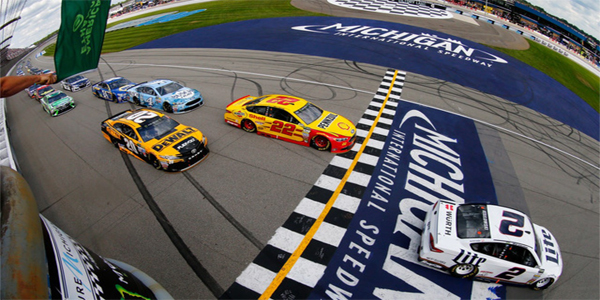 We’ve got a NASCAR Cup Series doubleheader this weekend at Michigan International Speedway. The drivers will get set for consecutive 312-mile races on Saturday and Sunday, with the first being the FireKeepers Casino 312 and the second being the Consumers Energy 312.

The seemingly random distance is based on kilometers, as the drivers will go 502 km to be exact. The race distance of 312 miles means 156 laps around the two-mile track and just over 500 kilometers.

Odds are out for the FireKeepers Casino 312 at 5Dimes Sportsbook, but we’ll save those for the end of the article because we have the two races this weekend and want the information to stand out more than anything. You’ll have to get the latest odds for the Consumers Energy 312 before that race on Sunday.

For now, let’s handicap the track, the past results, and see if we can’t find us a couple of winners this week in Michigan.

Michigan International Speedway is a two-mile-long D-shaped oval with a flat backstretch and a little more tilt to the frontstretch. The frontstretch is banked at 12 degrees and the backstretch is five degrees with four corners that come in at 18 degrees.

This is a twice-a-year stop for the Cup Series, so we do have a lot of data to go on. The races generally average about 7-8 cautions, but have been shortened because of the schedule format. For whatever reason, the average speeds in the second race are faster than those of the first race, which would suggest that the drivers make some good adjustments between the two stops at this track.

That may be something to watch for Sunday.

If you’re like me, you hear Herm Edwards every time you see the word playoffs. Anyway, there are 10 playoff spots accounted for with six regular season races left. Even if he doesn’t win, Aric Almirola will guarantee himself a playoff spot if somebody without a win doesn’t get one.

The 10 drivers with wins are Kevin Harvick, Brad Keselowski, who is now second in points, Denny Hamlin, Ryan Blaney, Chase Elliott, Joey Logano, Martin Truex Jr., Alex Bowman, Austin Dillon, and Cole Custer. There are two Daytona races left, including one on the road course, so a random winner could be a possibility.

We may get one or two here or there, but Almirola and the Busches, Kurt and Kyle, are safely in the playoffs barring some sort of ridiculous craziness. The others are still facing uncertain times.

Brooklyn, Michigan is the host city for this race, hence the cheeky headline. Matt Kenseth, Kyle Larson, Kurt Busch, Kevin Harvick, and Joey Logano each have three wins at this track. Larson is no longer in the Cup Series. Logano has his three wins in 22 races. Kenseth, Busch, and Harvick all have 38 starts.

Kenseth has 14 top-five finishes and 20 top-10 finishes with over $4 million in earnings here, but Kenseth last won here in the summer of 2015 and has not finished in the top 10 in his last five races.

Harvick has won the second race in back-to-back years and has seven top-five finishes in his last nine starts. Given the speed that he has shown this season, it wouldn’t be the least bit shocking to see Harvick take down one of these two races. He’ll be the favorite in both.

Logano has two of his three wins over his last eight races. He’s also finished outside the top 10 twice. He was third in the first race in 2017 for his only other top-five finish. He’ll face shorter prices because of his successes here, but he hasn’t been consistently good at Michigan.

Kurt Busch was 23rd in the summer race last year, but he was second, sixth, and third prior to that. He’ll be listed in the +2500 range for each race, unless he wins the first one and his price is adjusted down. He may not be a bad gamble this week.

It might be the week to get back on Chase Elliott. He easily has the highest average finish here at 7.6th place. He’s got three top-five finishes and seven finishes in the top 10 in his eight starts. His car has not been up there with some of the others in recent events, but up until this season, Chase was at his most dangerous on the big tracks. He doesn’t have a win here, but he’s finished second three times. He’ll be in the +1200 range on Saturday and probably a little lower if he shows well.

Michigan native Brad Keselowski doesn’t have a win here, but he’s got six top-five finishes in 21 starts. He only has one in his last six starts, though. Team Penske has had some fast rides, but instead of Keselowski, maybe Ryan Blaney is the play. He’s had one of the fastest cars all season long. He hasn’t had much success at Michigan, but he also hasn’t had these types of cars.

Aric Almirola isn’t a bad look this week either. Almirola has had an excellent Stewart-Haas car and rolls into this weekend with nine straight top-10 finishes. Historically, he hasn’t been strong here, but, again, he’s frunning a much different car this year.

Denny Hamlin has two wins here and has easily been the best of the Joe Gibbs Racing team. He was runner-up in the summer last season and has eight top-five finishes. Only Kenseth and Harvick have more at MIS.

With two races, we have a lot of guys to consider. Chase Elliott and Aric Almirola are two I would bet in each race. Also, watch Saturday’s race to see what happens and maybe you can pick up on some things for Sunday as well.

BET ON THE MICHIGAN RACE WEEKEND AT 5DIMES

I’d also play Harvick in any and all matchups. He runs well here and has had the best car all season long. Logano might be worth some matchup looks as well, depending on who he gets matched up with.

Odds for the FireKeepers Casino 312 from 5Dimes Sportsbook: