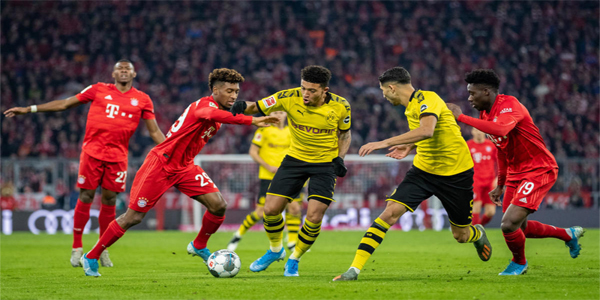 All of the professional sports leagues have been itching to get the go-ahead to move forward with their respective schedule, especially if they have to rely on getting the green light from a government entity. And to a certain extent, they all do, don’t they?

At the same time, they are going to be at the mercy of somebody who can make the decision to take the whole thing away.

As Germany’s top-tier league, the Bundesliga, comes back to action on the weekend, what BetAnySports customers may not be aware is that the league itself is right now at the mercy of its players as far as keeping itself in good working condition.

That’s because it has been necessary for them to put a number of protocols in place to ensure the health and safety of the competitors, but they need those players to comply with their directive.

And there are some major concerns along those lines.

What these means is that it may actually come down to the wire for the league to remain eligible to collect up to $325 million in television revenue and hold on to a number of star players through the rest of the championship schedule before their contracts expire, as it has to end by June 30 for all that to stay in place. And realistically, it could blow up at any time.

Before we go into detail, let’s give you the European soccer betting odds on the Bundesliga, posted at BetAnySports and showing Bayern Munich (also presented as Bayern Munchen) as the top dog:

It is incumbent upon the players to be strict about the way they construct themselves. In fact, the “Follow the Rules” pamphlet has been translated into 28 different languages, which reflects the vast international nature of this league.

Bundesliga CEO Christian Seifert has been adamant that all the teams were “on probation” since any slip-up in protocols could conceivably cause some players to become infected, which could force another suspension in the schedule, which would kill the agenda completely. And it may affect whether other leagues will make the decision to open things up as well.

It goes without saying that the stadiums will not have fans, with the number of people allowed at each venue limited to 300. And the games are being shown in the UK on free, over-the-air television so to guard against fans gathering at any one home or other location to watch it with someone who has a Sky TV pay subscription.

They are on edge, for sure, and that’s why they took quick action against Salomon Kelou, a striker for 13th-place Hertha Berlin, who actually uploaded a video clip on social media which showed him shaking hands with teammates. Kelou has been suspended, and Bundesliga hopes that is going to be an isolated incident.

However, the entire Dynamo Dresden team – members of Bundesliga-2, Germany’s lower-tier division – was ordered to be quarantined for 14 days after two players tested positive for the coronavirus. And thus, Sunday’s scheduled road game against Hanover, in which Dynamo, a bottom feeder in the second division, had been priced at +360 at BetAnySports, has been canceled.

This could happen to any team at any time, and the Bundesliga brass knows it. And it will be very strange not to be playing in front of crowds this weekend, although Monchengladbach, the 150-1 longshot to win the title, is trying to create that “home feeling” by allowing fans to send in cutouts of themselves to place at their regular seat, for a fee of $20, the proceeds of which will go to coironavirus research. Now if they could only make a lot of noise……..