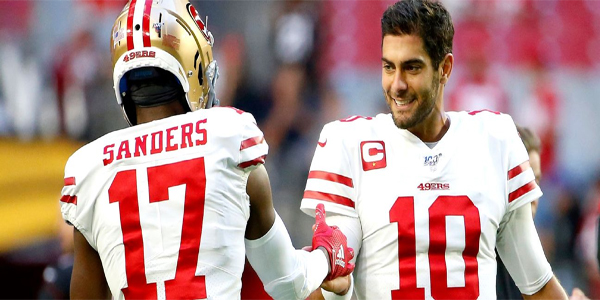 The general consensus is that when the San Francisco 49ers made a deal to acquire wide receiver Emmanuel Sanders from the Denver Broncos, it was a difference-maker for their season. Actually, the Niners were 7-0 when they executed that trade. But Sanders’ presence has nonetheless had its effect, well beyond the numbers.

Of course, when we are talking about Super Bowl props, we are pretty much confined to the numbers. So we have to work everything into the mix and thus it is well worth exploring.

Sanders, who has already won a Super Bowl with the Broncos (that being SB 50), will go after another one on Sunday as his team locks horns with the Kansas City Chiefs at 6:30 PM ET at Hard Rock Stadium in Miami Gardens.

Don’t forget that if you are a BetAnySports customer, you not only get reduced juice before the game, but also Sports Betting Ultra for real-time wagering during the contest itself, and a ton of props to challenge and/or amuse you.

Because of the quirks in the schedule, with bye weeks and so forth, Sanders played 17 regular season games, and caught a pass in all of them, which ties an NFL record. The Niners were already the hottest team in football when they reached out for him, but they did so with situations like this in mind. Since Kyle Shanahan arrived, the wide receiver corps had been a little thin. And Marquise Goodwin and Jalen Hurd went on injured reserve.

So Sanders came aboard and not only sparked the offense with his own efforts, but also because the veteran presence who helped the young receivers. And he likes that role. Deebo Samuel has benefited greatly from having him around. And ironically, that hurts Sanders’ chances of exceeding the numbers that are posted in his props, listed as such at BetAnySports:

Sanders did a nice job coming off an Achilles injury he suffered last December. He had a nice season, with 71 catches for 868 yards. And he had gotten off to a pretty good start with Denver this year, with games of 86, 98 and 104 yards within the first four weeks. So obviously he had some rapport with Joe Flacco.

The two-time Pro Bowl participant, who had more than 1000 yards for three consecutive seasons (2014-16), was naturally a welcome sight for Jimmy Garoppolo. But that doesn’t necessarily mean he has blown anyone away with his numbers.

Over his last ten games, he has averaged 39.8 yards on 27 catches, and scored exactly ONE touchdown. And if reduce that to a sample of the last five, he’s had a total of ten catches and 128 yards. The upside for San Francisco during that period is that Samuel’s yards-per-game average has doubled since Sanders’ arrival.

Four things should probably be noted. One is that he is on the field – a lot. Sanders has played at least 85% of the snaps in seven of the twelve games since he’s been in the Bay Area. Another is that he has a 67.9% catch rate, which is very solid. And of course, he’s been in a couple of Super Bowls, so he knows the stage.

Another thing that deserves mention is the fact that while he has had two 100-yards games with the 49ers, he has topped 41 yards in only one other game with them.

This would point me toward an UNDER on the receiving yards.

Sign up for an account at BetAnySports through Bang The Book, using the bonus code of BTB50, and it will be good for a 50% Welcome Bonus up to a $1,000 Deposit!