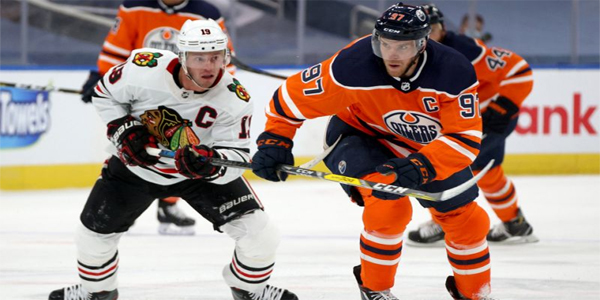 The NHL playoffs reach a critical point on Friday night. Toronto and Columbus play back-to-back nights and so, too, do Vancouver and Minnesota. Two rested teams play just before that, as the Chicago Blackhawks and the Edmonton Oilers strap up for Game 4. If the Blackhawks win, they will advance. If the Oilers win, the decisive Game 5 will be played on Saturday.

For a while, it appeared as though it would be the Oilers that would take the 2-1 series lead. They led 3-2 with six minutes left in the third period. Then Matthew Highmore struck for his fourth career NHL goal. Jonathan Toews got credit for Chicago’s game-winning goal, but it was Connor Murphy’s shot from the point that crawled up Ethan Bear’s stick and went in as an unfortunate own-goal for the Oilers.

The Oilers are -135 to even up the series per the odds at DSI Sportsbook. That makes Chicago +115 on the opposite side to advance with a 12 over 5 upset. Wouldn’t it be fitting that we got robbed of March Madness and still get to see 12 over 5 upsets in a bracket format? The Montreal Canadiens have the chance to do the same to the Pittsburgh Penguins on Friday.

The Oilers have a lot of things to figure out. It wasn’t like Connor McDavid and Leon Draisaitl were shut down with the Blackhawks having the last change. In fact, those two guys were the only ones that scored goals for the Oilers. In an effort to spark some offense during a parade to the penalty box, Draisaitl even got some PK time out of his 24:22. McDavid did not, but he and Draisaitl were out there for over five and a half minutes on the power play.

Edmonton was shorthanded six times in the game. Fortunately for them, the Blackhawks only capitalized on one of those PP chances. Unfortunately, the goal was scored with just five seconds left in the first period.

The Oilers may have some additional lineup changes for Game 4. The loss of Adam Larsson was a big deal, but the Oilers also lost Tyler Ennis to an upper-body injury in the game. Ennis only played nine shifts and just over six minutes of ice time. His absence was felt throughout the game, but it was Larsson that really threw things out of whack for the Oilers.

With Larsson out, Caleb Jones moved into the lineup. Jones only played 15 shifts for just 9:44 and Matt Benning played just over nine minutes as well. That left the other four defensemen on the ice a lot, including Oskar Klefbom, who led the team with 27:07 of ice time.

Larsson’s status is in doubt for Game 4. If he cannot go, the Oilers will be without a top-pairing defenseman again and have to be in that position with the first line change.

Corey Crawford was certainly better in Game 3. He made 25 saves on 28 shots, but didn’t allow any of the backbreaking five-hole goals that he allowed in Game 2. Mikko Koskinen wasn’t up to par. The Oilers have had 30 high-danger chances compared to 19 for the Blackhawks. At even strength, Edmonton’s expected goals against is 4.07. They’ve allowed nine even-strength goals in the series. That simply won’t get it done. Koskinen needs to be better in Game 4 and that is a lot of pressure on a guy that has not been in that spot before.

The Blackhawks are not winning this series 5-v-5, but Edmonton’s substandard goaltending and poor penalty killing have allowed Chicago to not only hang around in the series, but to have a series lead.

With all of that in mind, it is hard to lay a favorite price on Edmonton here. Their big stars have showed up in Draisaitl and McDavid and they still trail in the series. Somebody else needs to do something. Maybe Koskinen. Maybe secondary scoring. Maybe Larsson back in the lineup. That seems like too many maybes and too many asks of a team in an elimination game.

BACK THE BLACKHAWKS IN GAME 4 AT BETDSI