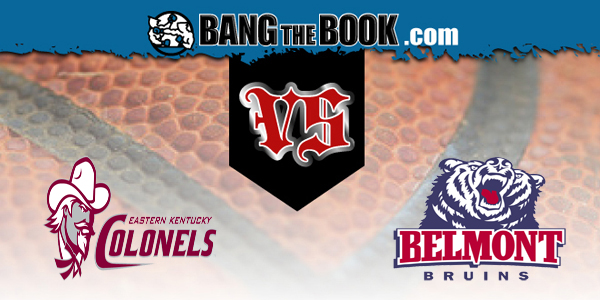 LSU was an emphatic winner last night with the spotlight pick, so we’re 2-1 this week heading into a busy Thursday card. A lot of mid-major conferences are in action this evening and that makes for a lot of good betting value on the board. Several games have been canceled or postponed tonight, unfortunately, so we have to work around that, but that is the nature of the beast this year with COVID still lingering.

There is a total I really like in college hoops tonight and that game will be the one in the spotlight for us tonight. That is the game between Eastern Kentucky and Belmont down in the Ohio Valley Conference. Belmont is looking to improve to 15-0 in OVC play and should do so as an 11.5-point favorite against EKU. The total on the game sits at 159.5 at Bovada Sportsbook.

Spoiler alert. Eastern Kentucky is third in the nation in adjusted tempo. The Colonels like to push the pace whenever possible and they’ve played all of their games this season to at least 72 possessions. They’ve had many that have gone much higher than that. This is a pretty good EKU team as well. They suffered home losses in step-up games to Austin Peay and Murray State and Morehead State, but properly handled their affairs against the lesser teams in the league.

Belmont is not a lesser team. This does indeed look like a spot where Eastern Kentucky could get blown out. Those three losses were by 13, 15, and 12, so it is pretty interesting to see this line come down a little bit from the 12.5 it opened. The Colonels don’t really stand out offensively from the field. They are 176th in 3P% and 187th in 2P%. One thing that they do really well is take care of the basketball. They rank 56th in TO% on offense.

Eastern Kentucky likes to shoot threes. In conference play, the Colonels are second at 36.3% on triple tries and they are third in 3P Rate at 42.4%, which means that over 42% of their shot attempts are threes. They’ve continued to take good care of the basketball in OVC play, so they’ve gotten up a lot of those three-point shots. They actually aren’t an overly efficient offense, but rack up points with volume.

Defensively, Eastern Kentucky forces a lot of turnovers. The Colonels are first in the OVC in TO% on defense at 24.4% and fifth nationally at 25.1% for the season. One big area of weakness on defense is that the Colonels allow a lot of offensive rebounds.

Casey Alexander’s transition from Lipscomb of the Atlantic Sun to Belmont of the Ohio Valley has gone really well. Alexander heads into this game with a 29-3 record in conference games and a 46-8 record overall. Belmont’s offensive efficiency has been a sight to see. Sure, Belmont has played the 327th-ranked schedule, but all you can do is play the teams on the schedule.

The Bruins are second in the nation in eFG% on offense at 59.4%. They are second nationally at 62.2% on two-point shots and 46th in 3P% at 37%. They are a really special offensive team that, like Eastern Kentucky, takes good care of the basketball. Even though both of these teams force a lot of turnovers, we may not fully see that on display in this game.

Belmont is also 61st in the nation at the free throw line at 74.4%. The schedule has provided a boost, but Belmont is also blowing teams away. The Bruins lost 96-83 to Samford back on December 5 for their only loss. Since then, they’ve failed to win by double digits only four times in 17 games. One of those wins was by nine. You can look down on Belmont for the schedule, but they are still 13-6 against the spread, so they’ve outperformed expectations.

Belmont moves at a pretty quick pace. When they’ve played tighter games, like the ones against Austin Peay and Murray State on the road last month, they did slow down a bit and possessions became a little more important. Belmont has also gotten into the high 80s a lot and most projections have them in that range again tonight.

I think this will be a fun game for Belmont. They go through the motions a lot because they blow teams out. They’re first in 3P% and 2P% in OVC play. EKU is second in 3P%. We have the potential for lots of points in this game and I think Alexander will allow his Bruins to run with the Colonels. I’d expect to see this game in the upper 70s in possessions.

With two good offensive teams, especially Belmont, this game has the potential for lots of points. If EKU can keep it closer, as the line move suggests, it should work some free throws into the end-game situations as well. I’m not sure we’ll have to rely on that, but this looks like a track meet.