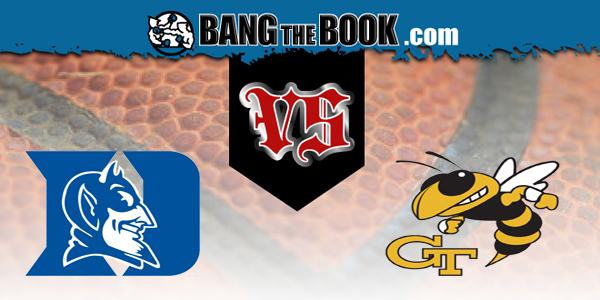 Another good battle between Oklahoma and Oklahoma State fell on the side of the Cowboys, so we got to rope and ride a winner on Monday night to start the week off on a positive note. Now it’s time for the Tuesday card.

The March 2 slate is highlighted by that big Baylor vs. West Virginia battle with a weird 5 p.m. ET tip, so that won’t be in the spotlight for us. Instead, we’ll look at a later tip with a focus on Duke vs. Georgia Tech. The Yellow Jackets are favored by a bucket at Bovada Sportsbook, but the line is showing signs of possibly coming back down to 1.5. The total is sitting at 146.

With Duke allegedly on the bubble, this game, like every game, is a big one for the Blue Devils.

Jalen Johnson could very well be a great player in the NBA, but his loss seems to be addition by subtraction to a degree for Duke. The only thing more sporadic than Johnson’s playing time was his production. He had 18 points in 24 minutes in the first Georgia Tech game, which was really his second-best showing of the season. He had 19 against Coppin State and 24 in a loss to Pitt. He did have 19 rebounds to go with his 19 points against Coppin State, but, well, that was Coppin State.

The Blue Devils won three straight after Johnson said he was opting out, including a win over Virginia that put Duke back in the NCAA Tournament discussion. The loss this past weekend to Louisville put a damper on those hopes, but wins over Georgia Tech and North Carolina to finish out the regular season would go a long way.

Standout sophomore Matthew Hurt put the team on his back in that loss to Louisville. He had 37 points and seven rebounds in his 43 minutes before fouling out late in the game. Wendell Moore Jr. was the only other player in double figures with 13. This has been an ongoing problem for Duke. There simply aren’t enough consistent scorers on the roster and it was a big enough problem to cost them a big game at home on Saturday.

In the win over GA Tech back on January 26, there were four Blue Devils in double figures, led by DJ Steward with 19. In league action, Duke is second in 2P% at 55.3% and fourth in 3P% at 36.4%, but ranks eighth in assist rate because this is not a team that shares the basketball well.

Perhaps the biggest reason why Duke is on the bubble or maybe even under the cut line is a 2-7 record in games decided by six or fewer points. Hurt tried valiantly to put the team on his shoulders and will them to a win last time out while getting basically no help. We’ll see if help arrives here.

Georgia Tech is playing some pretty good ball down the stretch run. There aren’t many bad losses on the resume for the Yellow Jackets this season either. Their season started with a grueling 4OT loss to Georgia State and then a 10-point loss to Mercer. After that, the losses are Florida State, Virginia, and Duke on the road, Virginia at home, and then Clemson on the road by just two points.

Josh Pastner has done a pretty solid job overall in Atlanta. There were a couple of transitional years as he put his stamp on the program, but this is a team that could very well make its first NCAA Tournament appearance since 2010. Offensive prowess from a senior-laden team is a big reason why. The Yellow Jackets rank 17th in adjusted offensive efficiency and 37th in eFG%. They are 34th in the nation in 2P% and 86th in 3P%.

In ACC play, Georgia Tech is third in all of those categories except eFG%, where the Yellow Jackets rank fourth. They do have the highest TO% on defense. To be totally honest, the statistical resume of this team suggests that they should be better than 9-6 in league play. This is a bad rebounding team, which has been a hindrance, and opponents have shot 36.6% on threes, but Georgia Tech does have the second-lowest 3P Rate against in conference action.

Most of the losses for Georgia Tech in league action have come against stout defensive teams. The loss to Duke is the exception. In that game, Duke was 18-of-22 at the free throw line. Georgia Tech was just 4-of-5. Late-game fouling didn’t even really come into play until the absolute end. It was just an imbalanced call of the game.

A lot of the metrics sites do have this line higher than 1.5 or 2, so we are definitely seeing that “must-win” bubble talk premium on Duke to a degree here. The Blue Devils are playing a bit better than their full body of work, so current form could also be playing a little bit of a role in the line.

But this is also a case of a known commodity in Duke against a mostly forgotten ACC team in Georgia Tech that has gone a decade without an NCAA Tournament berth. To me, that puts the value on the Yellow Jackets, who have the better body of work overall and some pretty good stats.

I’ll ride with the Yellow Jackets here. I do think this price could go down as a result of public money, so you’ll probably do better than -1.5 or -2 as the day goes along.