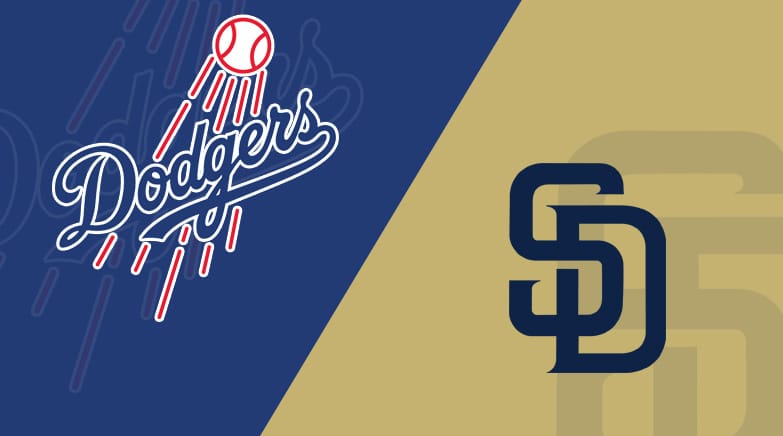 The hype train started down the tracks long before the 2021 season even began. The head-to-head meetings between the Los Angeles Dodgers and San Diego Padres were basically being treated like World Series games and we were all excited about getting 19 of them.

So far, we’ve seen seven of them, with four going to the Padres and three to the Dodgers. The next installment of the head-to-head rivalry begins on Monday night at Petco Park with a phenomenal pitching matchup featuring Yu Darvish and Julio Urias. This should be a great series and a great opening game.

The line is set as Padres -125 at BetUS Sportsbook, as two elite starters and two teams loaded with position player talent face off on the first day of summer. This is the first time since October 7, 2019 that the Dodgers have been an underdog. Unless the line flips, the streak ends at 150 games.

We expected all of these games this season to be between the first-place team and the second-place team. We weren’t entirely sure which would be which, but as the Summer Solstice takes place, these two teams are chasing down the San Francisco Giants. The Dodgers are the closest, trailing by 1.5 games. The Padres have been something of a disappointment and sit five games back.

Los Angeles is a little bit shorthanded right now, as Cody Bellinger spends some time on the IL. The Dodgers are the second-best offense in baseball against right-handed pitching this season and, surprisingly, Bellinger actually hasn’t done much to help out. He’s one of the few regulars to struggle in that split. The Dodgers have only gotten 16 games from Bellinger this season, but have still managed to have some very good offensive numbers.

What they do miss is Bellinger’s power. Los Angeles has a very high walk rate, which is why the Dodgers grade so well in so many offensive metrics that reward teams for not making outs. The reality is that Los Angeles is second in wOBA against righties, but only ranked eighth in SLG entering play on Sunday.

The nice thing is that Julio Urias has not needed much run support this season to be effective. The Dodgers southpaw enters this start with a 3.54 ERA and a 3.30 FIP. He should honestly have even better numbers than that. Urias has struck out 90 and walked 13 in his 84 innings of work. He has allowed 11 home runs, which has been a bit of an issue, but his LOB% at 71.2% looks low based on the strikeouts and his command profile.

The Dodgers are just generally a team that should be better. They entered play on Sunday at 43-27 with a +102 run differential. Pythagorean Win-Loss said they should be three games better and BaseRuns has LAD two games better. An 8-13 record in one-run games has been the primary difference.

There are a lot of storylines with the San Diego Padres right now. For starters, pardon the pun, we’re all waiting to see what Yu Darvish’s spin rates look like as MLB continues the crackdown on foreign substances. Darvish saw big spin rate increases over 2019 and 2020 and actually had two of his best starts by fastball spin rate in June before a decline in his most recent outing.

Darvish allowed four runs on six hits and only struck out five in five innings. The start was at Coors Field, so that could have contributed to both the stat line and the spin rates, but this is a situation to watch very closely. Darvish’s average fastball spin rate in his June 9 start was 2641 rpm. It was just 2415 in his last start. That was his lowest of the season by far.

He enters this start with a 2.57 ERA and a 3.26 FIP in his 84 innings of work. He’s struck out 97 and walked 21, but now we have to wonder about his future performance with that huge spin rate decrease. He also faces a very tough lineup on Monday.

The Padres now have to worry about the spin rate conundrum when they should be most focused on fixing the offense. San Diego’s offense actually ranks below average when compared to the rest of the league by wRC+. Entering play on Sunday, the Padres had only scored 67 runs in 18 games in June after scoring 155 runs in 28 games in May. That was against a much weaker schedule.

This could also be a trickier matchup for that beleaguered offense. While the Padres grade slightly above average against righties, they went into Sunday’s game 24th in wOBA against lefties with a .296 mark. That’s down with teams like Cleveland, Seattle, and the Mets. That isn’t a good look. They’re also waiting on the status of Fernando Tatis Jr., who left after reinjuring his shoulder over the weekend.

When it comes to the Dodgers, I have one clear-cut rule. Bet on Julio Urias at low prices. Urias is an elite pitcher and one that probably doesn’t get his due because he’s overshadowed by Clayton Kershaw, Trevor Bauer, and Walker Buehler. I’m not sure people realize how good he is. The Dodgers are playing better now than they were at the time of their other meetings against the Padres, whereas San Diego is really struggling offensively.

It’s the Dodgers for me here.