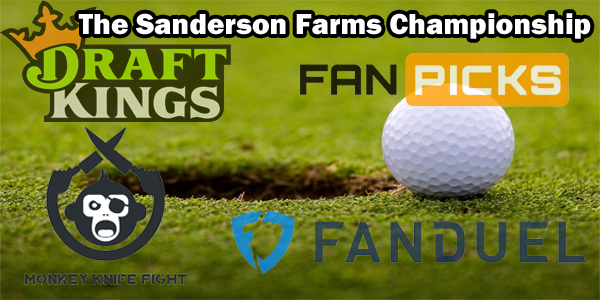 There was a DFS shake-up early in the week in advance of the Sanderson Farms Championship. Louis Oosthuizen, who had the second-highest salary in DraftKings formats, withdrew from the event. This is a pretty weak field and the players that have the highest salaries have the highest upside of the players that will be in Jackson, Mississippi, but they aren’t exactly the most trustworthy players.

Oosthuizen’s exit makes last year’s runner-up, Sungjae Im, the player just behind Scottie Scheffler, who is coming back from a bout with COVID-19. Reigning champ Sebastian Munoz is now the fifth price on the board. This is not a good field and it will be a challenge for DFS players this week to find some upside at a low cost.

We’ll do the best we can to find those types of bargains with our look at the Sanderson Farms Championship. Salaries are from DraftKings.

Talor Gooch ($7,400) – Upside. We’re looking for upside. Talor Gooch is not consistent at all, but Gooch, who was 14th here two years ago, has four top-25 finishes in his last eight events. He also has three missed cuts. In fairness, two of the three missed cuts were on much tougher courses than this one. Still, Gooch is a guy that is a pretty decent ball striker more often than not and one of the few guys that should make a run at a good finish at a reasonable price. He was 2-under to miss the cut at the Safeway Open because lots of guys were going low, but he didn’t play particularly bad. He’s a good bounce back candidate in a field like this.

JB Holmes ($7,000) – JB Holmes came back from two months off with a shoulder injury to finish 46th at the Safeway Open. All in all, it wasn’t a bad showing for Holmes, who had a lot of rust to shake off. He shot 70-68-70-71 to go 9-under. Holmes hits the ball a long way and this is a very forgiving golf course off of the tee, so even if he is a little erratic, he won’t be punished for it. Holmes will give himself some easy wedges to these narrow putting surfaces and he’s one of the more accomplished players in this field and easily one of the most accomplished in this salary range.

Jason Dufner ($6,800) – Jason Dufner struggled at the PGA Championship, but he quietly played well after the restart. Dufner has made the cut in seven of nine events, including a top-30 finish at the Safeway Open in his last start. In terms of recent form, not many of these guys at the lower salaries can lay claim to a whole lot of made cuts or decent finishes, but Dufner looks like a guy that should be able to give you 72 holes worth of scoring. When you’re running out of money, you’ll take that every time.

Sahith Theegala ($6,600) – Sahith Theegala played well at the Safeway Open with 21 birdies against four bogeys and a double. His T-14th was the best finish of his young career on the PGA Tour. He also played well enough to be T-41st at the Barracuda Championship. This isn’t an alternate event this season, but these are the types of courses that players like Theegala can do well with because they are not particularly tough. The last six winners of this event have been first-time PGA Tour champions, which speaks to how this tournament and others like it are catered for players that usually don’t experience a ton of success. Theegala is really young, but it seems as though he has improved over the last few months.

Wesley Bryan ($6,300) – Wesley Bryan did not have a good showing at the Safeway Open, but he had three straight top-35 finishes prior to that, including two top-25 results. We’re not looking for miracles at this price point, but Bryan is a guy that was in pretty good form before a month off prior to the Safeway Open. He didn’t play bad at 4-under, but that was a course where you were forced to go really low and Bryan wasn’t low enough. He did have two eagles to go with eight birdies. As a recent form play, you could do a lot worse when running low on funds.