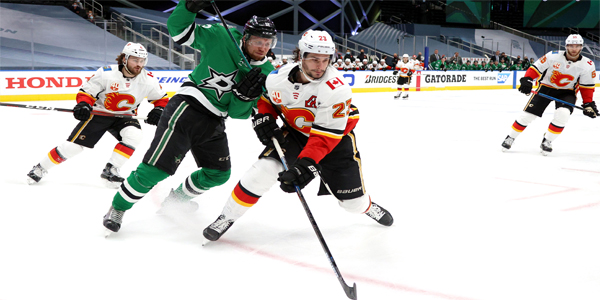 It may not have been all that pretty, but the Dallas Stars got the job done in Game 5 and now have the Calgary Flames on the brink of elimination. The Flames aren’t going to go down without a fight, as all of the games in this series have been closely contested. Four of the five games have been decided by one goal and the Flames won Game 3 by a 2-0 score.

The Stars are -130 to finish off the series with a total of 5 and -115 on the over at BetDSI Sportsbook in Thursday’s Game 6. While the series has been pretty balanced on the scoresheet, the Stars are the rightful favorites at -130 to end it. They’ve clearly been the better team at 5-v-5. The Stars have had the higher number of scoring chances at 5-v-5 in each of the last four games. They’ve only outscored the Flames 9-7 at 5-v-5, but they’ve been the team to carry the pace and dictate the game.

The Stars have also dominated this series in shot attempts. And in puck possession. And high-danger chances. They’ve done everything that they’ve needed to do in order to be successful, but there have been two things that have held them back. The first has been the power play, but not in the way that you think. Dallas has scored three power play goals and Calgary has four, but Dallas has allowed three shorthanded goals in the series. They’ve led to some pretty frustrating beats for under bettors.

The other is that Cam Talbot has been the better of the two goaltenders. Talbot has stopped 177 of 191 shots. Anton Khudobin has stopped 108 of 118 shots since taking over for Ben Bishop, who was deemed unfit to play after his Game 1 performance. Bishop only stopped 22 of 26 shots and didn’t appear to be healthy in that game or really in the Round Robin matches either.

The Flames have a major injury of their own, as Matthew Tkachuk has missed three of the five games in this series. They’ve missed him a lot. His physical presence is something that teams look for in the playoffs, but Calgary also didn’t generate a ton of offense during the regular season and Tkachuk led the team with 61 points and was second to Elias Lindholm with 23 goals.

If the Stars are able to advance, they’re going to need to find some more offense themselves. John Klingberg and Miro Heiskanen are among the leaders in points in this series and they are defensemen. Joe Pavelski, Jamie Benn, and Alex Radulov have scored some big goals, but the Stars are going to have to generate some more quality scoring chances with their forwards. That would also go a long way in helping their cause in Game 6.

From a betting odds standpoint, it was a little bit surprising that the Stars did not take more money going into Game 5. They’ve been the better 5-v-5 team in the series by a long shot, but the markets didn’t feel all that confident in their chances of winning, even with the “home ice” advantage of the last line change.

Does that shed some light here on Game 6, where they are a little bit larger of a favorite? Tkachuk is a game-time decision and it may simply be a case where bettors are waiting to see if he plays.

Dallas won Game 5, but not convincingly. Talbot was good again. Calgary actually played one of their better games of the series, but came up on the short end of the stick. We’ll zig back to Calgary here and look for them to force a decisive Game 7.

TAKE THE FLAMES TO FORCE A GAME 7 AT BETDSI SPORTSBOOK!