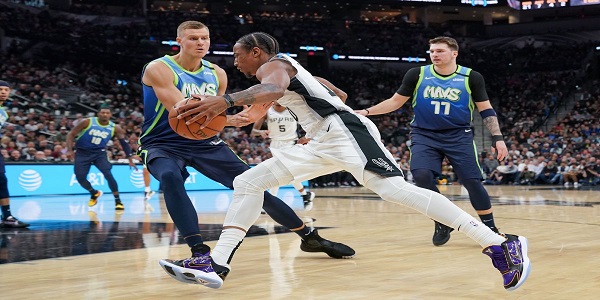 The Dallas Mavericks (39-26; 34-28-3 ATS) have never swept the Spurs in the regular season, but that could change Tuesday night when they meet San Antonio for the fourth and last time this term. In their first two encounters of the season, the Mavs beat the Spurs 117-110 as 4.5-point home favorites and 102-98 as 8-point home favorites. Back in February, the Mavs outlasted the Spurs 109-103 as 4-point road favorites.

The visitors opened as 3.5-point favorites with a total of 227.0 points at Betonline, 5Dimes, and BetDSI. This could easily change if Luka Doncic doesn’t suit up for tonight’s clash.

The Spurs are in a difficult situation, trailing five games behind No. 8 seed in the West. The Mavericks sit at the seventh spot of the Western Conference standings, a game behind the sixth-seeded Houston Rockets and only 2.5 games behind the fourth-seeded Utah Jazz.

Dallas is coming off a 112-109 home loss to the Indiana Pacers this past Sunday. The Mavericks have won five of their last eight games overall, while they haven’t dropped two straight contests since February 7. On the other side, the Spurs have just finished a three-game road trip with a 132-129 overtime loss in Cleveland. They’ve won only two of the previous seven games overall.

The Mavericks have a unique opportunity to sweep the Spurs. Before they beat San Antonio three times this season, the Mavs have lost 15 of their previous 17 encounters with the Spurs. Still, the Mavs are 11-4 ATS in their last 15 contests against San Antonio.

In their previous meeting the Spurs on February 26, the Mavs had a double-digit lead for most of the game, but they allowed the Spurs to cut the deficit late in the fourth quarter and even took a one-point lead with 6:16 left on the clock. However, Kristaps Porzingis, Seth Curry, and Luka Doncic hit a 3-pointer each to lift their team over the Spurs.

The Spurs will have a tall task to avoid another loss to the Mavs, especially if Luka Doncic takes the court. They lost Dejounte Murray and LaMarcus Aldridge will almost certainly remain sidelined. Therefore, if Luka Doncic suits up, I suggest you go with the Mavericks to cover. The Spurs’ defense is horrible and will struggle to cope with the Mavs’ fluid offense.

When it comes to the totals, I would go with the over even though the under has hit in five of the previous six encounters between these two Southwest Division foes. I’ve mentioned how bad the Spurs are defensively, while the Mavericks also have serious issues. The over is 11-5 in Dallas’ last 16 games overall, and it is 10-3 in San Antonio’s previous 13 outings.