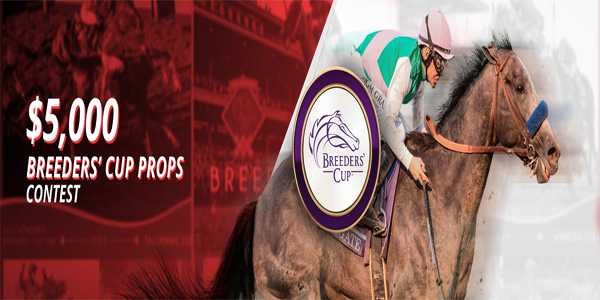 The greatest horse racing event of the year is drawing closer, and you can be very much a part of it.

The Breeders Cup is scheduled to take place at Keeneland Race Course in Lexington, KY on November 6 and 7. BetOnline will present a series of props that are related to the results of these races, and in fact have created a contest out of it for their customers to participate in.

It’s called the $5,000 Breeders Cup Props Contest, and you can participate in it all the way up to a Friday 2 PM ET deadline, which is in advance of the kickoff of the two-day event.

You are going to make your picks on these props. And you will score one point for each correct answer. If you are able to accumulate a total of ten points you will be the winner of the $5,000 prize. Of course, the official race results as they are released at Keeneland will be the determinant of which prop answers are correct.

Qualifying for this contest isn’t too hard; all you have to do is make at least $10 in real money wagers on any of the Breeders’ Cup races. And take note that these wagers can be made in either the racebook or the sportsbook (where there are certain special Breeders’ Cup offerings, including head-to-head matchups).

By the way, if there aren’t any contestants who don’t have ten points in the contest, the $5,000 prize will be split up between the players who have tallied the most points. And it will be deposited into your sportsbook account as a free play with a fix rollover requirement.

This Breeders Cup is a little different than it’s been in the past, because of the pandemic and social distancing, but when you are betting it online, there’s really not much of a difference at all.

The presence of Maximum Security, a horse that brings with him quite a bit of intrigue and controversy, is a real drawing card for this year’s Breeders’ Cup. He’ll be competing in the Classic, which is the richest race in the event.

But he is not the favorite; he is, in fact, the third choice, behind Tiz the Law and Improbable, at +450.

The futures prices on the field, as they are posted at BetOnline:

That is listed in the sportsbook, along with the matchups, where, for instance, Tiz the Law is -185 over Maximum Security (+145).

Swiss Skydiver, the winner of the Preakness Stakes, is in the Breeders Cup Distaff, but at +240, she is the second choice to Monomoy Girl (+150).

And don’t forget that you can catch all the Breeders Cup action ; NBC Sports Network and TVG will have all the Friday action, and Championship Saturday will be televised by NBC.

Naturally, BetOnline will get you very close to all the action, at all the tracks, all weekend long in the racebook, with special props available on the sportsbook side…… And you can open your account using a whole bunch of methods, including cryptocurrencies like Bitcoin!

SIGN UP NOW FOR A BIG DEPOSIT BONUS AND YOUR CHANCE TO ENTER THE BREEDERS CUP CLASSIC PROPS CONTEST AT BETONLINE!