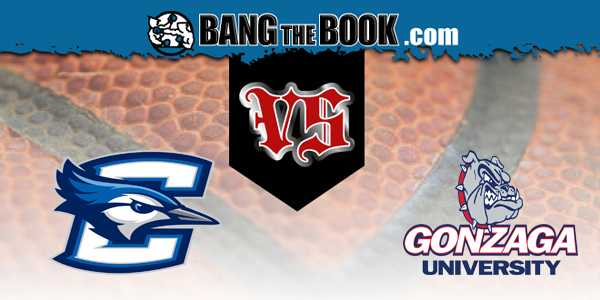 Sunday action in the Sweet 16 gets underway with the tournament favorite laying a large number of points. The Gonzaga Bulldogs meet the Creighton Bluejays at Hinkle Fieldhouse in Indianapolis in the #1 vs. #5 game and it looks as though the overall top seed in the tourney will meet little resistance from a quality team from the Big East Conference.

Gonzaga is -13 with a total of 158 from the fine folks at Bookmaker Sportsbook in the first of four Sweet 16 contests on Sunday March 28. Gonzaga has won 28 games this season and only five of them have been by fewer than 13 points. We’ll see if they can blow another team out and add another cover to what is already a stunning resume.

Say what you will about Creighton, but this is a step up in class for Gonzaga. The Bluejays are ranked 20th according to Bart Torvik. The ‘Zags have only played two teams ranked higher than that in Iowa and Virginia. Gonzaga won those games by 11 and 23, respectively.

Creighton is a really solid ballclub. Creighton’s style of play makes it tough to bet on them because the Bluejays are a jump shot offense. Their 3P Rate of 43.9% is 39th in the nation. They do a good job making those long-distance shots at 36.5%, but a team whose success is dependent on tough shots is hard to bet on, especially when you talk about playing a team like Gonzaga with incredible levels of offensive efficiency.

But, what the Bluejays do, they do it very well. They’re also in the top 10 in 2P% at 55.9%. Again, over 56% of their shots do come inside the arc and they are very good at making those. Inexplicably, Creighton is shooting 64.3% at the free throw line. How a team could be that good shooting contested or longer-distance shots, but struggle so badly at the free throw line is one of this season’s great mysteries.

Creighton did step up in class well when asked. This is a team that went 7-3 in Quadrant 1 games. While the offense for Greg McDermott’s team seems to get all the attention, this is a defense that sits in the top 35 in 2P% defense and the top 60 in 3P% defense. Creighton just didn’t force a lot of turnovers, but still sits in the top 30 in adjusted defensive efficiency per Torvik.

Creighton had some issues late in the season, as the team lost three of its last six games between the regular season and the Big East Tournament and a poorly-worded and rather unacceptable reference from McDermott caused a rift in the program that led him to offer to resign. Instead, he was simply suspended for a game.

Dominance. Gonzaga basketball is equated to dominance, at least for this season. The Bulldogs have had one close call. They beat West Virginia 87-82 earlier in the season. Otherwise, every other win has been by double digits, and that hasn’t just been beating up on the West Coast Conference. Gonzaga’s non-conference scalps were Kansas, Auburn, West Virginia, Iowa, and Virginia. The Bulldogs added Oklahoma to that list in the second round and also found a way to cover the game, much to the chagrin of Sooners backers.

One thing worth pointing out here is that Gonzaga allowed 1.098 points per possession to Kansas, 1.008 to WVU, 1.037 to Iowa, 1.091 to Virginia, 1.121 to BYU in the WCC Tournament title game, and 1.029 to Oklahoma. Good teams were able to score a little bit on the Zags, but were unable to stop Mark Few’s team from lighting up the scoreboard. Gonzaga’s worst offensive performance this season was 1.028 PPP against Pacific on February 4.

Will Creighton get any stops in this game? Gonzaga is first in eFG% offense. The Bulldogs are first in 2P%. They are in the top 35 in 3P%. They are a solid free throw shooting team. They also push the tempo and play at a quick pace while taking great care of the basketball. This team is about as flawless as it gets.

This handicap boils down to a few considerations. How good is Creighton? Well, that’s at the top of the list. This is the best non-conference foe that Gonzaga has seen in basically three months. Of Gonzaga’s “impressive” wins, Virginia, Kansas, WVU, Iowa, and BYU are all out of the tournament before the Sweet 16.

The second is basically a question of whether or not you want to back a Creighton team that has to shoot well from the outside. If they do, they’ll be a good bet. If they don’t, they’re losing by 15+. We have no way of knowing. Teams did make some threes against Gonzaga this season, but not consistently.

Another consideration is whether or not you want to step in front of Gonzaga. The Bulldogs are 28-0 with big, inflated lines and are 14-12 against the number.

I’ll give Creighton a shot here. The Bluejays play annually at Hinkle Fieldhouse, so they’re familiar with the lay of the land. They’re also a really good team. There are 13.5s out there, but since we cited Bookmaker for the odds, 13 is the best we can do.