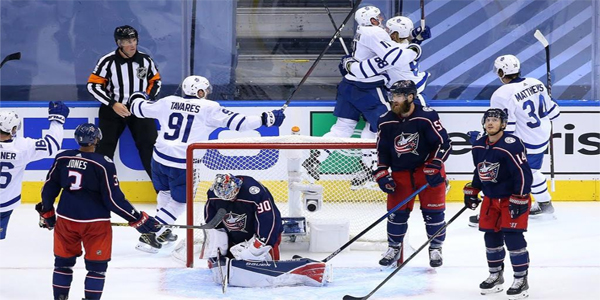 It was right there for the taking for the Columbus Blue Jackets. They led 3-0 in an elimination game. They could have knocked off the Toronto Maple Leafs and punched a ticket to face the winner of Saturday’s Tampa Bay vs. Philadelphia game. Instead, they did what the Maple Leafs did in Game 3. They blew a three-goal lead and went on to lose in overtime.

The Maple Leafs are favored in the -145 range in the betting markets. The Blue Jackets are +125 to erase the bad taste of Game 4. How they do that is anybody’s guess. It was a slower burn for the Maple Leafs. The Blue Jackets led 3-0 with four minutes left in regulation and gave up two goals in 51 seconds and then a third with just 23 seconds left in the game.

Columbus is saying all of the right things about looking ahead and moving forward and this and that, but the reality is that they shouldn’t even have to play an extra 60 minutes in this series. They may also have a goaltender controversy on their hands.

Elvis Merzlikins took over for Joonas Korpisalo in Game 3 in a move that head coach John Tortorella said was more about sparking the team than Korpisalo’s play. Then Merzlikins got the start in Game 4 and was brilliant for 56 minutes. As the Maple Leafs scored to make it 3-1, Merzlikins was less aggressive on shooters. Columbus collapsed in front to protect him and maybe impacted his ability to make saves. Merzlikins went down too early and left the top of the net unprotected. He got too small in the net and left his legs open.

The Maple Leafs don’t have any such controversy. Frederik Andersen was fine in Game 4. He didn’t really have much of a chance on any of the Columbus goals and bounced back pretty well from the Game 3 collapse by him and his team. He didn’t see much work in the overtime period, as the play was dictated by his team, but he played big in the net when he needed to.

When the game is on the line, the best are supposed to take over. Auston Matthews did that for Toronto. He led all skaters with 10 shots on goal. He had the game winner and two assists in the third period. On the other hand, Matthews was held in check for most of the first two periods. He and John Tavares came alive late in regulation and on into the overtime period. The Maple Leafs will now have the last change for Game 5 and that could have a massive impact on what happens.

The Blue Jackets have some drama on defense as well. Dean Kukan was back in the lineup for Game 4, but he was injured during Game 3 and Columbus had to shorten the bench on the blue line. In Game 4, Zach Werenski was limited to just 21:24 of ice time. It was Seth Jones logging 33:11 and David Savard and Vladislav Gavrikov that picked up the slack with 27:41 and 29:04, respectively. Werenski missed the last nine minutes of regulation and all of overtime.

He’s a huge loss for the Jackets. He and Jones are one of the top pairings in the league and certainly one of the most underappreciated. Werenski had a wrist issue earlier in the series and there was no update on his injury on Saturday during Columbus’s media availability. He’ll go if he can and it seems clear that Columbus needs him, especially with how Matthews likes to come in the zone on the off-wing, which would be Werenski’s side.

It sure feels like Columbus had their chance and let it slip away. They have a goaltending controversy and a top-pair defenseman injured. They have gotten an excellent series from Pierre-Luc Dubois, but other guys have been missing in action. The Maple Leafs got a second life and have been the team to carry the play more often than not in the series.