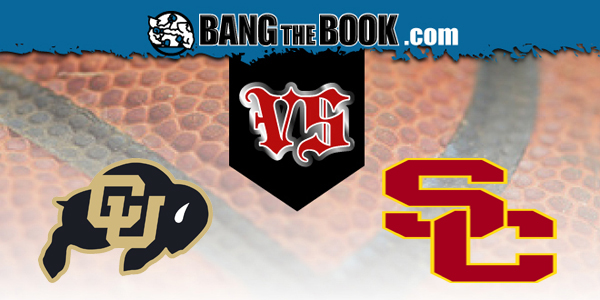 There are quite a few games on New Year’s Eve that we could put into the spotlight on the college basketball side of the spectrum, but there can be only one. With some intriguing conference clashes, we’ll take a look at the 10 p.m. ET game in the Pac-12 between Colorado and USC.

The Trojans are favored by a bucket with a total of 139.5 at BetOnline Sportsbook. We’ve already seen some two-way action on the side from early bettors, as Colorado dipped down to as low as +1 and now sits +2 after the line opened in between at 1.5. The total has ticked down from the 141 opener, so that has been a one-sided line move.

We’ll look at both sides of the coin here and attempt to find a play for what could end up being the last college hoops game of 2020 depending on when it finishes relative to Cal vs. Oregon.

Tad Boyle has another good team in Boulder. The Buffaloes are 6-2 straight up and 5-3 against the spread on the young season. They lost by nine against an outstanding Tennessee team back on December 8 and just lost to Arizona by 14 on the road after a holiday break.

The Arizona loss was a major outlier from Colorado based on what we’ve seen so far. The Buffaloes allowed 1.305 points per possession, easily eclipsing the previous high of the season when they allowed 1.026 points in a 10-point win over Grand Canyon in the game prior.

Colorado continued playing at a good offensive pace in that Arizona loss with 1.097 PPP, but the Wildcats just shot the ball too well and Colorado had its worst game of the season in terms of forcing turnovers.

The Buffaloes are in the top 30 nationally in 3P% and rank second in the nation in free throw percentage, which are great ways to have a solid offense. They also rank in the top 100 in nearly every important offensive category, including 2P%, where they are 51st. Over the last three games, however, opponents are shooting 67-of-118 on deuces for a 56.8% clip. That will have to get better if the Buffs want to keep the pace they’ve been at this season.

USC is off to a 5-1 start overall, but this will be their first conference game. The Trojans do have an impressive win over BYU and a competitive loss to UConn thus far. They are 4-2 against the spread. USC is only shooting 60.1% from the free throw line on the season, but were 17-of-21 in the three-point UConn loss, so it hasn’t really come back to hurt them just yet.

Opponents are only shooting 38.3% on two-point shots against the Trojans this season, which is a big reason why the total has ticked down a little bit on this game. The Trojans are fifth in Effective Field Goal Percentage on defense, while also being in the top 50 on offense. This is a team with some solid metrics and one that has played the 75th-ranked schedule according to Bart Torvik.

This has been a pretty efficient offensive squad that takes great care of the basketball and a quality defensive team without fouling. It makes for a tough handicap here because Colorado does a lot of the same things well. They aren’t as efficient of an offense, but they have shot the ball better from distance and have also forced a few more turnovers.

The big matchup, pardon the pun, in this game will be between seven-footers Evan Mobley and Dallas Walton. Walton hasn’t been used a ton this season by Colorado, playing only 42.2% of available minutes, but his services may be needed to stack up against the true freshman in Mobley.

Give USC credit. They went 21 days between games because of a pause and then rolled Santa Clara by 23 on Tuesday night. We’ll have to wait and see how sharp they look for this one and live betting could be a really smart opportunity once we see the Trojans on the floor.

But, you’ve read through this and you’d like a pick on the game. I’m looking over the total. It has come down based on some sharp involvement, but these are two very efficient offenses and USC has only played outlier game with 60 possessions. Their other games have had at least 69 and four of six are in the 70s. Colorado has moved at a pretty average tempo under Boyle in the past.

I’ll look at the over in this one.