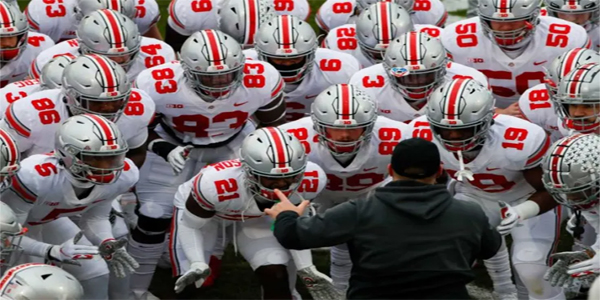 The Big Ten was not even supposed to play this year, remember?

Now one of its teams has a chance to win a national title.

As BetAnySports customers are undoubtedly aware, the Ohio State Buckeyes, who have only played seven games this season, earned their berth in the National Championship Game through a strange route, which included gaining a special exception from the Big Ten Conference to even appear in their title game, because they didn’t have enough games under their belt to qualify.

Well, they did get that game against Northwestern, although maybe they would have received their college football playoff spot anyway. And then, with their revenge-fueled 49-28 win over Clemson in the Sugar Bowl, which also functioned as the national semi-final game.

Even now they only have seven games on their ledger, although not all of that is their fault (Michigan, for example, canceled their game). Still, some felt as if they didn’t deserve to go further, and that apparently included Clemson coach Dabo Swinney, who ranked them #11 with his vote in the coaches’ poll. Maybe he was just trying to avoid them as a playoff opponent.

That didn’t work, did it? Clemson, which beat Ohio State in last year’s playoff (29-23), and in controversial fashion, we might add, got off to a 14-0 lead and then pretty much got snuffed.

Justin Fields, who had thrown an interception to end OSU’s chances in that Fiesta Bowl game, tossed six touchdown passes, and during this process overcame a massive hit by linebacker James Skalski that injured his ribs.

The final was 49-28, and that woke up a lot of people about what they could do, as they had gone into that game as a 7.5-point underdog.

But oddsmakers are not necessarily impressed with their chances against Alabama. In the BCS Championship Game odds that have been posted at BetAnySports, they are, in fact, a considerable underdog:

There has been some discussion that the Buckeyes may actually be suffering from a “letdown” here. Now, before we go any further, let’s explain that this is not one of those instances where they have won a big game and are taking this particular opponent lightly. That would be a silly thing to believe; after all, this is Alabama we’re talking about.

No, what we are talking about is that they worked themselves up to a fever pitch for the Clemson game and one has to wonder whether they can get themselves to that emotional level again – the emotional level that is required – with so little turnaround time. It would be almost impossible to do that.

The Buckeyes had been thinking about that Clemson game for the whole season – a whole calendar year, in fact, after that loss in last year’s semi-final game, which they felt was taken away by the officials, among other things. They posted material at the training facility and in the locker room that reminded OSU players about the business at hand.

Can he prepare that way again? As a practical matter, it’s a rough task, from a physical and mental standpoint.

We wonder about the euphoria that may have come after that resounding revenge victory. How much did they celebrate? Did that somehow inadvertently contribute to the troubles with COVID-19 that they appear to be having now? It’s hard to tell; college teams can be secretive about that kind of thing.

Okay, if they haven’t come into the game as prepared as they could be, how might that manifest itself, aside from betting Alabama and laying the points?

Well, maybe it affects the way they come out in the early going. There are a few props that might apply. One of them is about who scores first:

Another involves who scores the first six points:

All of these props are available at BetAnySports, where you can also get reduced juice in betting the side and total. And after the game begins, you have more of an opportunity to play, with Sports Betting Prime……. Open up your account in time for the game – use a debit card, credit card, person-to-person transfer or the virtual currency of Bitcoin, where there is NO transaction fee!