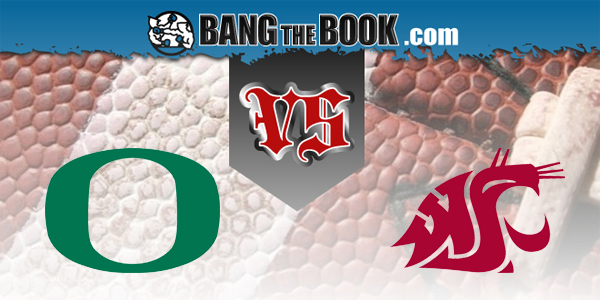 Can we even believe what we were watching last week? Washington State, the team that ran the ball less frequently than any other last season, suddenly turned into a juggernaut over ground, and although they’ve only played one game, the Cougars have the highest yards-per-carry average in the nation (7.3 ypc).

Nick Rolovich took the head coaching duties as Mike Leach moved on to Mississippi State. That meant the program traded out the Air Raid for the Run-and-Shoot. Well, they both ran and shot against Oregon State in the opener, with incredible balance in the offense – 227 yards through the air, and 229 rushing. And the result was a 38-28 victory.

Rolovich, who had limited time to install the new offense, with spring practice out the window, had to take a short cut, and he had a guy on hand in Jayden de Laura, the freshman who played in the run-and-shoot at Saint Louis High School in Honolulu (alma mater of Marcus Mariota and Tua Tagovailoa). When you think about it, if you are talking about newcomers, you couldn’t have found a better one to bring into the program.

We don’t have a whole lot of problems with the major components of offensive coordinator Joe Moorhead’s attack at Oregon – and that includes new QB Tyler Shough, who’s had some time in the system and threw for 227 yards against Stanford last week in their 35-14 win, Add to that CJ Verdell, who is flat-out one of the best running backs in the Pac-12, and who had a whopping 257 yards in last year’s 37-35 Ducks victory in Eugene.

That was a Wazzu cover, by the way, and in fact, the last TEN meetings have belonged to the Cougars on the pointspread ledger. Washington State has also won four of these last five meetings. We say that just in case you were wondering whether Oregon was the intimidating side here.

How ironic that Leach leaves (admittedly for better money) and is now struggling at Mississippi State, after what may have been a false flag in that opening romp against LSU, while Rolovich is on his way to changing the face of the Wazzu offense. Yes, it’s too soon to tell, but it is something of an edge that he has not had to teach his new signal-caller the offense from Square One.

And so, considering that the offense is at least being guided by someone who can see through the dark, we won’t look for much of a sputter on the part of WSU. We anticipate it will still be a daunting task dealing with Verdell and the Oregon ground game, though. Shough doesn’t necessarily need any lengthy indoctrination period either.

So what we’re saying is that we don’t see any reason for these offenses to crawl. They’ll get up and run. And it probably bears mentioning that even with some key absences on offense, Stanford would have made things much more competitive against Oregon (and produced a higher-scoring game) had they not missed four field goals. So our instinct is to move OVER the total.

BetAnySports makes every Saturday a celebration of college football, and they do that by giving you greater value! Try reduced juice and avoid having to lay the standard -110 on gridiron action, and then place wagers in real time with Sports Betting Prime……. Deposits can be made with debit card, credit card, person-to-person transfers or Bitcoin, so there’s no reason you shouldn’t be in on the action!