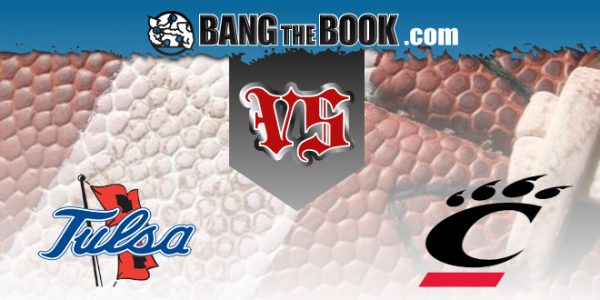 The Tulsa Golden Hurricane (6-1 SU & ATS) really had Oklahoma State on the ropes for a while in the opening game of the season. Some were shocked by that, but Tulsa has proven to be a very tough customer on the way to the #20 spot in the Associated Press poll.

They have a chance to win the American Athletic Conference on Saturday night (8 PM ET), but they have to get past a huge speed bump, as they visit the Cincinnati Bearcats (8-0 SU, 5-3 ATS), the sixth-ranked team in the nation. Nippert Stadium (the former home of the Cincinnati Bengals) is the site, and the stakes may be higher for the ‘Cats, who believe they still have a chance for the college football playoff and certainly can get into a New Year’s Six bowl.

BetAnySports customers can get reduced juice on this game, so they’ll have better odds. And they can keep the action going with real-time wagering from Sports Betting Prime.

And in their college football odds, Cincinnati is laying quite a few points:

The best way to describe the Cincinnati running game is that it is something like a machine. Averaging 234 yards a game and 5.8 per carry (which is fourth best in the nation), the chief components are Gerrid Doaks (660 yards, 4.8 ypc) and Jerome Ford (6.2 ypc), an Alabama transfer who was granted immediate eligibility.

The wide receivers are not the strength of the squad. But the triggerman is Desmond Ridder, one of the best dual threats in the nation. Ridder has accounted for 27 TD’s, including eleven on the ground, and he has averaged 7.9 yards a carry.

Clearly the big surprise this season has been Tulsa’s emergence on defense, and that was evident when they took nationally-ranked Oklahoma State to the limit in the opener, holding the Cowboys to just 277 yards in a 16-7 loss. This is a team that brought back only three starters on that side of the ball, and they turn out to be a unit that allows just 4.5 yards per play, 19.9 ppg and ranking 20th in Total Defense. This represents a great job done by coordinator Joe Gillespie and his staff.

Shamari Brooks was lost very early in the season with an ACL injury. That left the Golden Hurricane in a position where they had to go with a running back-by-committee approach.

That committee consists of TK Wilkerson (317 yards), Texas A&M transfer Deneric Prince (356) and Corey Taylor (329). They run it 54.7% of the time, but in the metric of Adjusted Line Yards, their O-line is just 84th in the country.

Zach Smith may not be a spectacular quarterback (just 58%, 11-6 TD-INT ratio), but he’s been consistent. And you don’t want to sleep on receivers like Keylon Stokes (14.5 yards per catch) and Josh Johnson, who caught a 66-yard TD pass from Smith to produce the only touchdown of the game against Navy.

Tulsa’s not the only team that plays defense in this matchup. Cincy’s stop unit makes people stand up and take notice. They have a deep and experienced secondary that ranks second nationally in passing efficiency defense, allowing just 52% completions and 5.5 yards per attempt. Only Central Florida exceeded 20 points against them.

Cincinnati has created margins against teams equal to or better than Tulsa – for example, they beat SMU and Memphis by a combined 68 points. But Tulsa (which has covered six of its last seven as a dog) still has what it takes to keep this from getting out of control, in what shapes up as a defensive struggle. We’ll take two TD’s here.