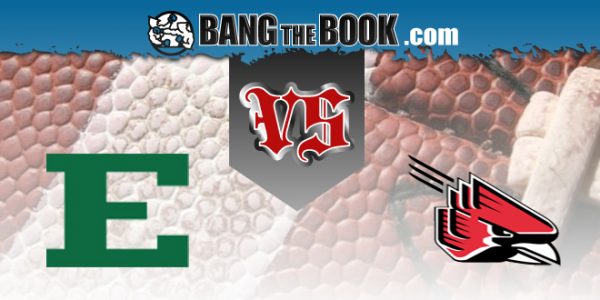 Once a very downtrodden program, Eastern Michigan has now been to three bowl games in the last four years, representing a nice turnaround for coach Chris Creighton. And maybe taking Pittsburgh to the limit in a 34-30 loss in the Quick Lane Bowl is progress.

It looks as if Preston Hutchinson, who completed 75% of his passes in limited duty last season, is making the job his own. He had 241 yards in the opening game,27-23 loss to Kent State, and Hassan Beydoun broke out to have 112 of those yards.

It’s clear that the concept at EMU is pretty good; the Eagles led the Mid-American Conference in passing offense last year. But they could use some balance, as they were only 116th nationally in rushing. And they only ran the ball 46.4% of the time last season. Has Darius Boone (68 yards vs. Kent) provided some good news in that area?

There are lots of seniors and juniors who have returned to the defensive backfield. But they will need more pressure on the passer (just 22 sacks last season).

Ball State appears to be the side that has more “pop” in the offense. Drew Plitt (2918 yards and 24 TD’s last year) did his part in the opener, with 309 yards. Justin Hall and Antwan Davis both topped the 100-yard mark in receiving. And then there is the true “go-to” guy on offense.

Caleb Huntley had 152 yards in last year’s 29-23 victory over Ball State – on his way to 1275 for the season – and he hit the ground running (pardon the pun) with 130 yards and two TD’s last week. He runs behind an offensive line that returned a lot of experience despite the loss of athletic tackle Danny Pinter (drafted by the Indianapolis Colts).

With a lot of this firepower, Ball State still finished 5-7 last year and fell to Miami of Ohio last week 38-31 as the RedHawks scored a touchdown with just ten seconds remaining.

Where the Cardinals have to make the difference this season is on the defensive side. The guys up front held up decently against Miami, one of the better teams in the MAC (allowing just 3.2 ypc), and almost all the guys in the two-deep among linebackers and defensive backs have experience. This is an opportunistic group (15 INT’s last year).

Mike Neu, a popular figure in Muncie as a former BSU quarterback, has a fertile offensive mind, and his team comes off a 2019 campaign in which it led the MAC with 34.8 points per game.

But can they be trusted to lay this many points?

We don’t usually like to lean too heavily on historical trends, unless they genuinely say something and they speak loudly. In this case we may have that.

No doubt the Cardinals can win this if it becomes nothing but a shootout. But some teams can cover on their home field and some can’t, and Ball State appears to be one that can’t. In fact, they have covered a woeful 11 of the last 41 at Scheumann Stadium, and that just can’t be ignored.

And neither can the recuperative power of EMU, which has come back to cover 17 of their last 23 after a loss.

With this many points available, and a lively passing attack at the very least, we’ll be “on the take” with Eastern Michigan.

Wednesday is a big night for college football action, and BetAnySports makes it even bigger, with reduced juice for better odds and Sports Betting Prime for real-time wagering……… They make a lot of payment options available. These include debit cards, credit cards, person-to-person transfers and the virtual currency of Bitcoin, which is fast and easy with their automated system, and NEVER incurs a transaction fee!