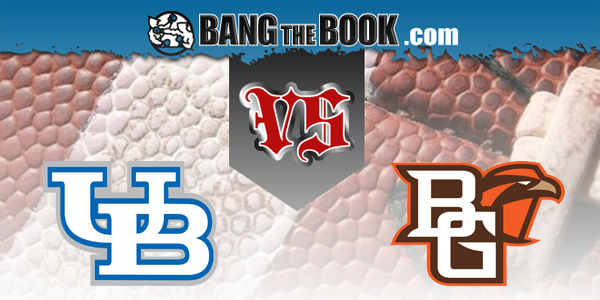 Don’t adjust your screen – that is the Buffalo BULLS we’re writing about. Aside from being known as the alma mater of All-Pro Khalil Mack, these guys are becoming known as one of the more formidable programs in the Mid-American Conference (MAC).

With someone like Lance Leipold at the controls you figured that had to come sooner or later. There are a number of head coaches who have amassed a legendary slate at the lower levels, but Leipold’s might be the most glittering resume of all.

In eight years in Division III football (no scholarships) at Wisconsin-Whitewater, he won six national championships, with a 109-6 record. No coach at any level in the NCAA ever got to 100 wins quicker.

It’s been a slower climb in Buffalo, but he has brought the Bulls to bowl games in each of the last two years.

The thing about Bowling Green is that they have not been able to stop the run for quite some time. Over the last three seasons, they have given up 5.6, 5.9 and 6.1 yards per carry. In the early going, that figure is 5.6 ypc, and we would hesitate to characterize that as an “improvement.”

When you allow almost 3000 yard son the ground, as they did last season, there is going to be cause for alarm even under normal circumstances. But this atmosphere is potentially extraordinary. That’s because they’ll have Jaret Patterson staring at them from the other side of the line of scrimmage.

Patterson is not just the best back in the Mid-American Conference; he may just be on the short list of premier running backs in the country – a pre-season All-American.

Last year Patterson ran for 1799 yards and 19 touchdowns. He’s cruised to 210 yards thus far in Buffalo’s first two games. But even with those numbers down, don’t get the wrong idea; he can shred this Falcon defense, which has been quite pliable no matter who the coach has been, or how many returnees they’ve had on the front seven.

And Patterson does not act alone; Buffalo truly has a two-fisted ground attack, when you consider the talents of Kevin Marks (6.4 ypc), who topped 1000 yards last season.

There is nothing wrong with Kyle Vantrease either. The junior quarterback has thrown just three interceptions in 217 attempts after taking on the starting role last season. And he hit big against Miami of Ohio, throwing for 345 yards.

Meanwhile, QB Matt McDonald, who followed first-year head coach Scot Loeffler to Bowling Green, has completed 14 of 50 passes, with a pair of interceptions. It’s been ugly. Under Dino Babers, BGSU was known for its up-tempo style on offense. At BC, Loeffler’s unit under Steve Adazzio was largely run-oriented. That’s the direction where Bowling Green will have to go.

But Buffalo’s defensive line is seventh nationally in Adjusted Line Yards allowed, if you like that kind of thing, so they are likely to get the Falcons both going and coming.

It’s “name the score” time, and when you are clamoring for national recognition and facing an opponent that has dropped eleven of their last 13 against the points, giving up almost 1200 yards in two games, well, there really is only one side to be with – BUFFALO.

Tuesdays mean the MAC in college football action, and BetAnySports answers the call, with reduced juice for better odds and Sports Betting Prime for real-time wagering……… They make a lot of payment options available. These include debit cards, credit cards, person-to-person transfers and the virtual currency of Bitcoin, which is fast and easy with their automated system, and NEVER incurs a transaction fee!