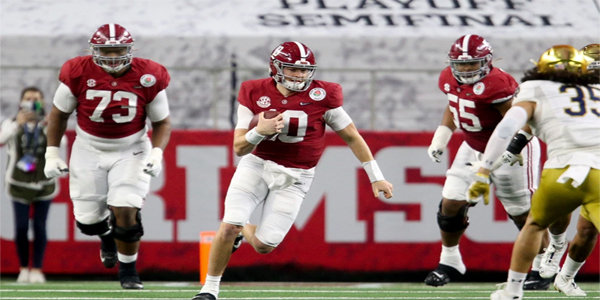 Okay, let me give you the reasons I like Alabama, even at this number, in the National Championship game:

* They simply have too much artillery. Mac Jones may not be as big an NFL prospect as Justin Fields, but you can’t argue with his numbers – 77% completions is insane, as is 11.3 yards per attempt. And the four interceptions are remarkable, given his ability to throw the deep ball.

Najee Harris gives Alabama the best running back on the field, with apologies to Trey Sermon, who’s had two great games this season. Overall, Harris has scored 27 touchdowns with 1387 rushing yards, and he can catch the ball too, although Jones would rather just fire away down the field if he can.

And who can blame him? Devonta Smith (105 catches, 1641 yards, 20 touchdowns) is the Heisman Trophy winner, and do you realize that he wasn’t even the most explosive wide receiver on his own team until Jaylen Waddle went down with an injury? Waddle was averaging 22.3 yards per catch when he fractured an ankle in a game with Tennessee. Now, after missing seven games, Waddle, who may also be the best kick returner in the nation when healthy, might actually be able to play in this game.Nick Saban calls him a “game-time decision.”

BetAnySports patrons may want to read an article published by Pro Football Focus in which they say they have accorded Jones their highest quarterback grade ever, even higher than Joe Burrow last season. And they have also given Devonta Smith the highest grade they have ever given a wide receiver. And out of Jones’ throws of ten yards or farther, only 18.7% have been deemed “uncatchable,” which is also by far the best in the country.

In a nutshell, they describe the Alabama passing game as “perhaps the best attack college football has ever seen.”

* The offensive line is the best in the nation, even without the nation’s best center. That is true. Landon Dickerson injured his knee against Florida in the SEC title game and has had to sit out. But Alex Leatherwood, perhaps the premier offensive lineman in the country, is still there to anchor things. They make it possible for Jones to execute long passes and open holes for Harris and others. And the edge may be magnified for this game. The rumors around here are that Ohio State’s COVID-19 problems include their defensive line group (remember that position groups commonly gather in the same meeting room, so if one goes down, they could all go down).

* Both of these teams have outstanding running backs in good form. We mentioned Harris. And Sermon has run for 524 yards in his last two games alone for the Buckeyes. Both teams have allowed just 3.2 yards per rushing attempt. To get the ball in their hands it might take something different than just running from scrimmage. I figure the air games will be most prominent. And you just showed you what Pro Football Focus had to say.

* And while both of these teams can be considered somewhat vulnerable to the pass, Alabama comes out ahead of OSU in that exchange. They have a deeper receiving corps; remember that Ohio State has Chris Olave (42 catches, 660 yards and Garrett Wilson (40 receptions, 673 yards), and not much else in terms of wideouts with considerable production. Alabama could perhaps take one of them away with Patrick Surtain Jr., who will almost surely be the first cornerback taken in the draft.

* Ohio State ranks just 116th in the country in passing defense (i.e., passing yards allowed per game). We admit that could be a bit deceiving, since Ohio State’s opponents are often behind and have no choice but to throw. But the Buckeyes are just 50th in the category of “pass explosiveness,” which means, in short, that they give up quite a few long plays. And Alabama has just the kind of balanced offense to exploit that – according to Football Outsiders, which compiles great metrics, they are first in Rushing Success Rate and second in Passing Success Rate.

* I’m not quite sure Justin Fields is going to make it through this game. If OSU was indeed trying to get a postponement, you can bet part of it was an attempt to give Fields more time to heal from his rib injury. One solid hit and he could be affected greatly. That wouldn’t be a solid basis with which to wage a shootout, which is exactly what might be required on Monday night.

It’s a lot of points, but we’ll lay them with the Crimson Tide. And it doesn’t have to be complete domination; in a high-scoring game, a double-digit margin isn’t necessarily a blowout.

Find all the props you’re looking for at BetAnySports, where you can also get reduced juice in betting the side and total. And after the game begins, you have more of an opportunity to play, with Sports Betting Prime……. Open up your account in time for the game – use a debit card, credit card, person-to-person transfer or the virtual currency of Bitcoin, where there is NO transaction fee!