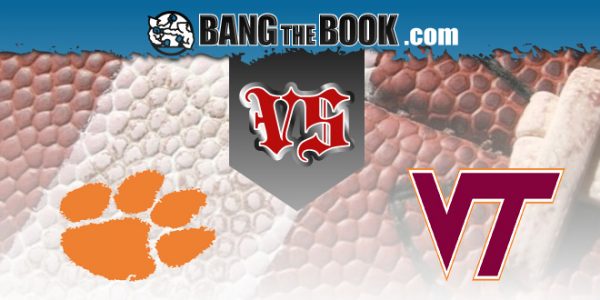 The Clemson Tigers didn’t handle losing well. They didn’t like the loss to Notre Dame and they were very vocal about losing the Florida State game to what they believed to be an overabundance of caution from the Seminoles. The Pitt Panthers found that out firsthand when they trailed 31-0 after the first quarter en route to a 52-17 blowout.

What will the Virginia Tech Hokies run into this week? It was pretty clear that Clemson was in the mood to blow somebody out and they did. Now the Hokies, losers of three straight, get ready to take on Clemson in advance of their annual rivalry game against Virginia.

This is the last scheduled game for Clemson, who will look to exact revenge on Notre Dame in the ACC Championship Game on December 19. They’ll go into this game as a 21.5-point favorite per BetOnline Sportsbook with a total of 67.

Virginia Tech gets a 21.5-point head start, but will it be enough? Let’s break this one down:

The visiting Tigers got Trevor Lawrence back for the first time in a month after he tested positive for COVID-19. The future New York Jet added to his resume with 403 passing yards and a couple of touchdown tosses before DJ Uiagalelei finished out the game in the fourth quarter.

Lawrence has completed 70.6 percent of his passes with a 19/2 TD/INT ratio. Travis Etienne has been the bell cow back for a team that has only averaged 4.1 yards per carry. Etienne has 5.2 and 12 touchdowns, not to mention his 40 catches that are second on the team and his 511 receiving yards that rank third. He’s done a lot for a team that did lose some skill position talent to injuries and the NFL.

It hasn’t come with much fanfare, maybe because of the lofty expectations for this Clemson squad, but the Tigers have outgained opponents by about 1.9 yards per play on the year. Notre Dame moved the ball with ease, racking up 6.56 yards per play in Clemson’s one and only loss of the season. Other offenses really haven’t done much.

There are some questions about Clemson’s defense. Years of losing draft picks to the NFL has to take a toll at some point and perhaps it has this season. Clemson is still a top-10 defense in third down conversion rate against and top 10 in yards per play allowed, but the Tigers have one noteworthy data point against a top offense and it wasn’t a good one.

Virginia Tech has a top offense statistically. The Hokies are 15th in yards per play with 6.8. That’s more than Clemson. Of course, the Hokies defense also ranks 94th in YPP allowed at 6.17. The snowball effect for this defense began before Bud Foster even retired, but this has been a Hokies unit that has been in freefall mode for a long time.

Head coach Justin Fuente could be on the hot seat because of the team’s defensive shortcomings in recent seasons, but the offense has been just fine. Dual-threat QB Hendon Hooker has thrown for 1,332 yards and rushed for 627 yards. He’s completed 65% of his passes and his availability for this season is a big reason why Virginia Tech has managed to be competitive. He is the team’s second-leading rusher and has the most rushing attempts.

Kansas transfer Khalil Herbert has ripped off 8.2 yards per carry for the Hokies as a fifth-year collegiate athlete. This is a solid offense with some good skill position talent, but attempting to outscore a team like Clemson is not an easy task, especially with a defense that has been so horrid.

Virginia Tech also has one of the worst red zone defenses in the nation. They rank 111th in TD% against, with 28 TD allowed in 38 opponents’ red zone trips. Even in victories, Virginia Tech has allowed over six yards per play.

Frankly, Clemson seems to be on the warpath. The defense was embarrassed by the Notre Dame performance and the offense, while passable for six quarters plus a couple overtimes under DJ Uiagalelei, now has its leader back. Expect Virginia Tech to move the football a bit, but don’t expect Virginia Tech to get many stops, if they get any.