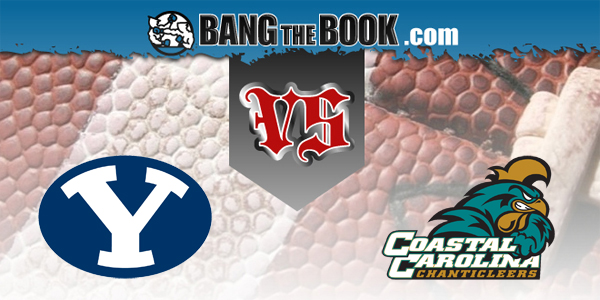 What a whirlwind this week has been for BYU and Coastal Carolina. More so for the boys from Provo, who originally thought that they were playing nobody this week, only to find out that they would be on a plane to Myrtle Beach on Friday.

As awful as COVID has been in so many ways this season, at least it has shown athletic departments and coaches what can be possible with just a little bit of flexibility. When Coastal Carolina’s schedule opened up because of the dastardly virus making its way through the Liberty locker room, BYU was there to seize the opportunity.

Now they’ll play on the teal turf in Conway, SC, a place that probably no BYU players have been to or will ever go back to for this impromptu Week 14 game. BYU is favored by 10 with a total 61 per the fine folks at BetOnline Sportsbook.

With minimal time for both teams to prepare, it will be very interesting to see how this line moves as the game draws closer, especially because you can poke holes in the unbeaten 9-0 records of both teams.

Through no fault of their own, BYU has played the 106th strength of schedule per Sagarin. Coastal Carolina checks in at 107th and they aren’t even a top 35 team per Sagairin. In fact, fellow Sun Belt members Louisiana and App State grade higher.

We’ll take a look at all of the factors in this one and see if we can pick out a good bet to make.

BYU presents a very interesting challenge for Coastal Carolina. Teams in the Sun Belt are nowhere near as physical as the brand of ball played by BYU. With older players that have had their playing years delayed by mission work and a lot of big-bodied recruits of Polynesian descent, this will be a big test in the trenches for the Chanticleers.

It is a big reason why this line opened where it did. You have to take the large men on the offensive and defensive lines into the equation and you can see a clear and distinct advantage for BYU in that department. It is also worth noting that BYU is 10th in yards per play allowed with 4.73 while Coastal Carolina is 30th with 5.18. Remember, the teams have played pretty identical schedules in terms of strength.

Zach Wilson is playing himself into an NFL draft pick. We’ll see if the junior leaves now or gives it another year, but he’s racked up a 26/2 TD/INT ratio with a 74.3% completion percentage by picking apart the porous defenses that BYU has faced. His favorite target has been Dax Milne, who needs 94 yards to cross the 1,000-yard mark for the season. He’s caught 49 balls. Gunnar Romney has caught 34 passes for nearly 21 yards per reception.

It doesn’t stop when BYU keeps the ball on the ground, as Tyler Allgeier has 7.2 yards per carry on 118 tries. The Cougars are third nationally in yards per play with nearly 7.9.

BYU hasn’t played a Power Five team yet this season, so they’ve been able to feast on the likes of Troy, Louisiana Tech, UTSA, Texas State, and North Alabama. Houston is the only team to score more than 20 points.

Coastal Carolina may have an ace up their sleeve as well. The Chanticleers utilize a ton of pre-snap motion to confuse and disorient the opposing defense. Without ample time to study film, BYU head coach Kalani Sitake and his staff will have to come up with a gameplan quickly.

While we don’t really think of Coastal as an explosive offense, the Chants are 17th in yards per play on offense with 6.74. They are a methodical, ball control unit that ranks third in third down conversion percentage on offense at 54.46%. Coastal ranks 14th in average time of possession per game. They stay on the field, wear down the opposing defense, and keep the chains moving.

Most of that task falls on QB Grayson McCall, who has completed 67.2% of his passes with a stellar 20/1 TD/INT ratio. The true freshman from North Carolina will probably lose head coach and play designer Jamey Chadwell to a bigger job, so we’ll see what happens going forward, but McCall has become a Sun Belt star and may eventually get some national recognition for his play.

Jaivon Helleigh is the top target with 41 catches, just about 2.5 times more than tight end Isaiah Likely. Coastal Carolina also uses running back CJ Marable a lot as a safety valve to stay ahead of the chains. He’s got 24 catches to go along with 119 rushes for 592 yards. It will be up to this offense to get the ball out quick and keep the defense from getting exposed in what will be an unusually physical game for that unit.

The Coastal Carolina defense has been pretty good for the most part. Louisiana did move the ball with ease with 7.5 yards per play and that is the closest comp we have to BYU, so that is very concerning. One thing that has really helped Coastal this season has been the pass rush. The Chanticleers are sixth in the nation with 31 sacks. Unfortunately, BYU has only allowed eight sacks in nine games.

This is a really challenging matchup for Coastal Carolina. Big, physical teams are rarely seen in the Sun Belt Conference and when they are, the results are usually pretty poor. Coastal Carolina will have to pull out all the tricks and hope that the pre-snap motion and the decision making of McCall are enough to keep the defense from getting roasted.

This is honestly a great game for live betting. If you see Coastal struggle to move the chains, they will get ground down by BYU’s physicality and that will create a live betting opportunity.

To me, though, I think Coastal is legit. I think Chadwell will have the right gameplan to keep BYU at bay and keep this game respectable.