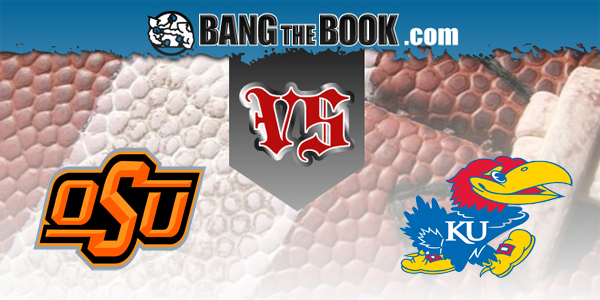 College Football Betting — Oklahoma State vs. Kansas: Will the Jayhawks Keep Getting Pounded?

People who support the Kansas Jayhawks may have been thinking that hiring former LSU coach Les Miles was going to have some kind of automatic effect in turning around what has seemed to be a moribund program. And that hasn’t happened. We’re not even sure there is hope on the immediate horizon, and by then the administration just might lose patience. Now they will have to line up against an Oklahoma State Cowboys team that may have grown up a little last week. Game time is 3:30 PM ET on Saturday at Memorial Stadium in Lawrence. BetAnySports customers can get reduced juice on this game, as well as the opportunity to place a lot of action in real-time through Sports Betting Prime.

Oklahoma State played without starting quarterback Spencer Sanders last week against West Virginia, but managed to come away with a 27-13 win with highly-touted freshman Shane Illingworth at the helm. It wasn’t the prettiest thing in the world, but Illingworth did not make the huge mistakes that would put the Cowboys in jeopardy. Still, it was a choppy offensive effort.

Kansas needs a solution to come from somewhere. There were no answers last week, as they were beaten pretty handily by Baylor (47-14), which came on the heels of an opening loss to Coastal Carolina, a Sun Belt Conference entry. Miles is experiencing a lot of growing pains with little quality depth and true freshman Jalon Daniels at quarterback.

The Cowboys are in the national rankings at #17 in the Associated press poll and #19 in the Amway Coaches poll. Oklahoma State has won the last ten meetings, and this corresponds somewhat with the period where Kansas has been somewhat less than competitive. Last year’s meeting was not a full-scale blowout, however, as despite being out-rushed by a 209-39 margin, KU was beaten only 31-13. That was respectable by Jayhawk standards, although OSU got the over (just barely, as they were laying 17.5 points).

In the college football betting odds posted on this game by the folks at BetAnySports, OSU is a healthy favorite:

There is something not right about Chuba Hubbard, or at least not as “right” as it was last season, when he gained a phenomenal 2094 yards. This year he is under 200 yards and perhaps even in the process of losing his place as the #1 tailback. Hubbard seemed very pre-occupied with throwing head coach Mike Gundy under the bus during the off-season, and perhaps that relationship suffered irrevocable strain. At any rate, Hubbard fumbled twice, and although he did score the touchdown that gave OSU the cover, Gundy did not seem uncomfortable at all going with his #2 option, LD Brown, who topped the 100-yard mark.

Hunter Anthony and Cole Birmingham are not available on the right side of the offensive line, but you have to ask yourself whether this is the kind of thing that will really hurt this squad against Kansas, which can’t get out of its own way.

There were questions from boosters about Miles’ tactic of bypassing junior college players for the sake of bringing youngsters into the program. One of those was QB Daniels, who has been compared to Cam Newton by Miles, even though he came to Lawrence as only a three-star prospect. He can run a little, but he did not stretch the Baylor defense, throwing for just 4.8 yards an attempt. So clearly he is a work in progress.

Oklahoma State (allowing just 20 points in two games) is doing something unfamiliar these days – winning with defense. Kansas’ best shot is to try and grind things out with Pooka Williams Jr., their best asset in the backfield.

We don’t know if Sanders’ ankle will allow him to play; if he is in decent condition to go, he adds an element to the OSU attack. If Gundy decides he won’t play, it will be more “safety-first.” In either case, we may be looking UNDER on this total.

College football is king at BetAnySports. Look at all these options you get, including the ability to place wagers while the action is in progress with Sports Betting Prime……… Before the game kicks off, get extra value with reduced juice………… Enjoy the games of chance with three no-download casinos, and three more with live dealers……. Make your deposits with a debit or credit card, person-to-person transfers or the virtual currency of Bitcoin, which is fast and easy with their automated system, and NEVER incurs a transaction fee!