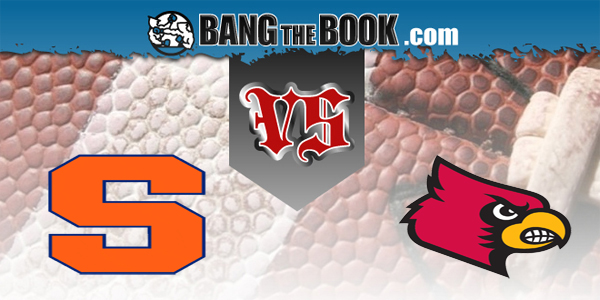 This may look to some as a line that is inflated, but Syracuse has to raise some level of concern among those who normally look for “live” dogs, because they have lost touch with a number of opponents, losing by 25 points to North Carolina, 24 to Wake Forest, 14 to Duke, and 17 to Liberty, although we must admit that a 26-point loss to Clemson was actually a cover.

This is obviously not what head coach Dino Babers envisioned. With Eric Dungey at the controls, his high-speed offense was humming, and the Orange was nationally-ranked. But expectations had to be lowered with the torch being handed over to Tommy DeVito, and now, with DeVito out of action with an injury, Babers has had to turn to Rex Culpepper, who may be a “comeback kid” in the sense that he has beaten testicular cancer, which obviously endangered his career, but hasn’t put up the kind of numbers that are going to give this team a chance most of the time.

Culpepper is completing only 46% of his passes, in a day and age where quarterbacks routinely complete 60%, and that should give you an indication.

Louisville is 2-6, but not as awful a 2-6 team as you might usually find. They can certainly do some things well. As an example, last time out against Virginia, the Cardinals lost 31-17, but got 317 yards on the ground. In last year’s meeting with the ‘Cuse, Louisville took off on a 56-34 romp behind 370 rushing yards. Syracuse had a very hard time stopping the run last season (allowing 5.2 yards per carry), and they aren’t exactly stout up front in 2020 (4.6 ypc).

But Louisville is missing a big cog in its offense. A year ago,. Javian Hawkins rambled for 233 yards on the ground. That was part of a fabulous freshman season – one that produced the third highest one-season rushing total in school history (behind only two seasons from Heisman Trophy winner and reigning NFL MVP Lamar Jackson).

But Hawkins, who was not available for the Virginia game because of “undisclosed reasons,” revealed this past week that he was opting out of the rest of the season to prepare for the NFL Draft, where he is expected to be a mid-level pick.

Scott Satterfield’s team is not completely lost without Hawkins; this week they will welcome back Hassan Hall, who is averaging 5.5 yards a carry in action that has been limited because of injuries and personal family issues. Hall is also considered one of the best kick returners in the ACC, if not the country, and he was on the pre-season “watch list” for the Paul Hornung Award.

And we might also expect that some adjustment in the attack involving more legwork from quarterback Malik Cunningham may be in order. Cunningham, who threw for five TD’s and ran for another in last year’s meeting, had 197 rushing yards last week vs. Virginia. So they should be able to move the ball.

The Louisville defense is a hit-and-miss proposition; we’ll be honest with that. But they are capable of very good efforts, or else they would not have been able to hold #2 Notre Dame to twelve points. We’ve considered going “under” with this one, but we don’t figure Louisville to be taking its foot off the pedal, and we don’t trust Syracuse to be able to keep this opponent below 35-38 points.

BetAnySports produces a great weekend in college football, with reduced juice for better odds and Sports Betting Prime for real-time wagering……… They make a lot of payment options available. These include debit cards, credit cards, person-to-person transfers and the virtual currency of Bitcoin, which is fast and easy with their automated system, and NEVER incurs a transaction fee!