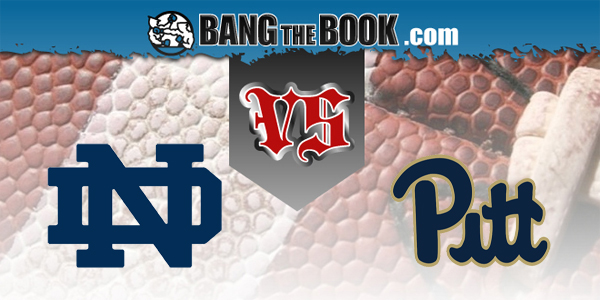 Maybe they’ve been victims of hard luck, but the Pitt Panthers are sitting with three straight defeats nonetheless. They’ve got some serious opportunity ahead of them, as they can take a huge step toward a bowl game with a big effort against the third-ranked Notre Dame Fighting Irish. Game time is 3:30 PM ET at South Bend. Let’s take a closer look.

As this is being written, there is the very real possibility that Pitt QB Kenny Pickett might have to sit things out again with an ankle injury. This would put the Pittsburgh offense in the hands of Joey Yellen, or perhaps redshirt frosh Davis Beville. Head coach Pat Narducci maintains a lot of confidence in Yellen, as does offensive coordinator Mark Whipple, who doesn’t always make things uncomplicated for his quarterbacks.

Yellen’s numbers were not awe-inspiring on the surface – 22 of 46 for 277 yards. But he did not come to Pittsburgh (from Arizona State) without some fanfare. So at least there is some reason to believe he could hold down the fort if the three-year starting QB can’t make post.

Here’s a team that has dropped three games in a row after the 3-0 start. And fans are unhappy with Narducci. But how far are the Panthers from being a legitimate contender for a national ranking? One-point losses to NC State and Boston College would seem to indicate games that were very winnable, and the absence of Pickett certainly handicapped them at Miami.

But maybe only because Yellen did not have enough time working with the first unit. All indications are that he is getting in a lot more practice time. He had starting experience previous to this season; last year, while at ASU, he threw for 292 yards and four touchdowns against USC. He is not one of those “dual threat” QB’s, instead more of classic dropback type. And he is more cerebral than most at the position.

One legitimate question that can be raised – is Notre Dame overrated at #3 in the nation? Sure, the Irish are undefeated, but the opponents they have faced have a combined 5-16 record. Ian Book may also be a tad overrated. He’s thrown for about 175 yards a game, which doesn’t even approach the numbers he complied most of last season.

Notre Dame makes up for this somewhat by rushing for 261 yards a game, which places them sixth in the nation in that category. But they may encounter more than just a little resistance from the veteran Pittsburgh front seven, which allows just 2.1 yards per carry. There is only one team in the country that has been stingier.

If Pitt could run the ball with any authority, there might be some real upset possibilities. But they can’t. And this is the kind of thing that would provide some valuable cover for Yellen, if he does indeed get the nod.

Some observers are of the opinion that the presence of Yellen, a four-star recruit when he went to the Pac-12, might give this Panther offense more “upside” than Pickett, even though the latter had cracked the top ten in passing yardage. These points can be debated. But what can’t be debated is that Narducci’s teams get down and dirty on defense, and that stop unit is better than the one on the Louisville side that frustrated the Irish last week.

Pittsburgh has to avoid those “costly turnovers.” But if they can keep that kind of stuff to a minimum, they have a chance to keep this one relatively tight all the way to the gun. We’re going to take the points with PITT.