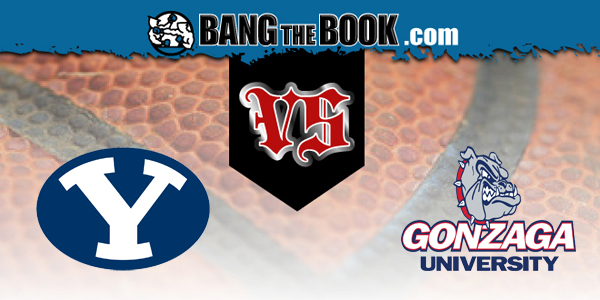 It goes without saying that this is the best team Mark Few has ever had at Gonzaga – even better than the squad that went to the national title game against North Carolina a few years ago. And after steamrolling through several very accomplished clubs,it looks like the ‘Zags could be entering the post-season with an undefeated record.

But there can always be slip-ups. One of those occurred last February against the BYU Cougars, who managed to deal the Bulldogs one of just two losses they suffered on the schedule…

They will now meet again, at the McCarthey Athletic Center in Spokane, in a game that begins at 8:30 PM ET on ESPN.

BetAnySports customers will be able to get reduced juice on this contest, which will give them better odds. And after the game has started, they can keep the action going with Sports Betting Prime.

On February 22 of last year, BYU clearly won the accuracy battle, hitting 53% overall from the field. And Gonzaga simply had a subpar shooting night, making just five of their 25 attempts from three-point territory in a 91-78 loss. So you might consider this something of a “payback” game for the Bulldogs.

And from what everybody has seen, they are fully capable of getting revenge – and we might add, doing so with any awful lot of emphasis if they are focused. They are, thus far, looking like college basketball’s equivalent of the Alabama Crimson Tide, in that opponents generally can’t come within a mile of them. Only one team – West Virginia – has gotten to within single digits of them. And you have to admit that practically blowing Kansas, Iowa and Virginia off the floor has to make Gonzaga a very solid favorite to go all the way at the moment.,

This game was rescheduled, and it is a result of BYU kind of being taken out of its rhythm. They had their first two West Coast Conference games postponed because of concerns stemming from COVID-19, and then the University of the Pacific had to pull out as well, for the same reason.

So this game, which was originally supposed to be played on February 6, wil be played now.

In the college basketball betting odds posted on this game at BetAnySports, #1-ranked Gonzaga is the big favorite

One of the factors that might have you holding out some hope if you are a BYU booster is that Gonzaga does its best work in short and mid-range offense. And the Cougars have acquired a skyscraper in 7-3 Matt Haarms, who transferred over from Purdue and is naturally a guy who is going to be altering a lot of shots.

But please take note that while Gonzaga is 132nd in the nation in three-point accuracy, they are third best in two-point percentage, at 65.2%, and they didn’t do this against the Little Sisters of the Poor either.

The ‘Zags have size, balance and versatility, and as if they didn’t already have an embarrassment of riches, they pulled in one of the nation’s top recruits in 6-4 guard Jalen Suggs, who is actually showing up in some mock drafts as the #1 overall pick. If Gonzaga is going to do any damage from long-range, it’s probably going to be done through him. In the game against Iowa, he scored 27 points, with SEVEN triples. And when the opposition wants to give him special attention, there are always 6-10 Drew Timme and 6-7 Corey Kispert, both All-America caliber players, who combined for 61 points against Virginia when Suggs wwas held to eight.

So to use that cliche, “pick your poison.”

BYU has had great long-ball shooters like Jimmer Fredette in the recent past, but this is not necessarily one of those seasons. This year they are hitting just 34.5% from the arc, and thus they are missing a weapon that could help keep this within earshot.

And they aren’t equipped well enough to slow down the tempo. But then again, who IS? Gonzaga took Virginia, which is the slowest team in the nation, and ran them out of the gym, scoring 98 points and shooting 60% against the vaunted Pack-Line defensive scheme of Tony Bennett. So what is BYU going to do if Gonzaga comes in with a chip on its shoulder?

Because of all these scheduling difficulties, BYU hasn’t played since December 23. That’s not rested – that’s RUSTY. We’re laying the points.