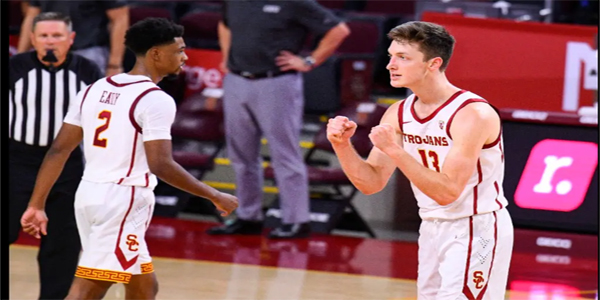 The NFL has center stage today, but there is some college basketball on the betting board as well. Some good games take place in the early window, but with the amount of lead time available, our focus here will be on the later games.

That includes a couple of conference clashes with St. John’s vs. Georgetown and Stanford vs. USC. We’ll break ‘em both down, even though the only similarities are that they are conference games and will take place after dinnertime on the East Coast.

Bet college hoops at BetOnline Sportsbook and get a 100% Deposit Match Bonus and do even better than that when you deposit with Bitcoin or another form of cryptocurrency.

Tune into FS1 for this Big East tip at 7:30 p.m. with the Hoyas the ever-so-slight favorite at -1 with a total of 153.5 in this matchup. The Red Storm dropped their conference opener on Friday by a 77-68 score to Seton Hall. Now they’re further down the Atlantic seaboard to take on Georgetown in Washington D.C.

St. John’s picked a bad time to go 4-for-21 from 3 in that loss to Seton Hall. In the two losses for the Johnnies, they’ve had .899 and .944 points per possession. When the offense has been good, the wins have come, however BYU and Seton Hall are the two best teams St. John’s has played and they’ve lost both games.

Georgetown is also off to a 0-1 start in Big East play after a defeat at home against Villanova. The Hoyas did okay offensively against the Wildcats, but also allowed a season-worst 1.179 points per possession. Georgetown has played a couple of quality defensive games against UMBC and Coppin State and those have been the team’s only wins.

In all three defeats, the Hoyas allowed over 1.1 PPP. That seems like a reasonable ask of St. John’s, who has shot 53.6% from 2 and also 74.3% at the free throw line. Georgetown has shot the ball worse in their games. The Hoyas are also 305th in the nation in TO% on defense at 13.5%. They’ve also turned the ball over too much.

With extra possessions coming for St. John’s and a better offensive profile, they get the nod here at +1, but you might as well go ahead and take the +100 on the money line at BetOnline.

It has taken some time, but Jerod Haase has really built up this Stanford program and may have his best team yet as the Cardinal open up Pac-12 play. Stanford scored a huge commitment from Ziaire Williams, who is off to a bit of a slow start, but the Cardinal can rely on seniors Oscar da Silva and Daejon Davis to pick up the load. The 6-foot-9 da Silva is off to a 27-for-42 start from the floor through four games, even though USC has played three high-quality opponents in Alabama, UNC, and Indiana.

Stanford is just 2-2, but that’s a byproduct of the schedule in a lot of ways. On the other hand, UNC’s defense showed major flaws this past week against Iowa and Stanford only managed .889 PPP in that losing effort.

USC has not played a challenging schedule to date. The Trojans lost to UConn, the best team that they’ve played, by a 61-58 score in a game that was played to only 60 possessions. USC was out of its element in that one and also shot just 3-of-19 from deep. Andy Enfield’s team has been poor at the free throw line, but has shot better than 56% on two-pointers.

The Trojans are third in 2P% on defense at just 36.2%. They’ve played Cal Baptist, Montana, BYU, UConn, and UC Irvine, a lot of teams that tilt more towards the defensive side, much like Stanford.

That’s why USC is the pick in this one. Stanford will have to find some offensive efficiency under challenging conditions. The Cardinal are only shooting 31% from deep and USC has been stingy inside the arc.